A Few Words With Micah Schnabel of Two Cow Garage 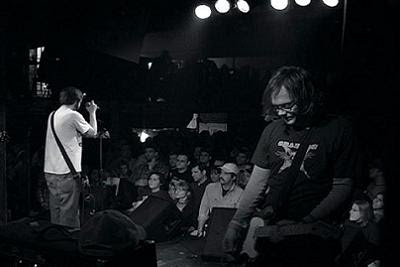 If you’ve been around these parts before, by no doubt you’ve already heard the honest, hard-working sounds of Columbus’ Two Cow Garage. I recently had the chance to speak with Micah Schnabel about his song writing, life in the Midwest, life on the road, and Rock and Roll.

IRC: Two of my favorite songs on the last album, “No Shame” and “Should’ve California” both dealt with the downside of being in a Rock ‘N’ Roll band. How strong were those doubts? Did you really consider packing it in?

Micah: There was never really any time where re really thought about packing it in. We’re pretty sure we’re going to do this forever, in some shape or form. Those songs were written at a time where we were working on the record and we weren’t getting out and touring much. We’re so used to working all the time, being out and gone, then, being home you get frustrated because you’re poor. You just start questioning those types of things. What am I doing? Am I doing the right thing? Is this working? It’s a natural thing for anybody when you’re struggling with something you love.

Other songs, like “Camaro” from III, or “135” from The Wall Against Our Back, have strong, nostalgic memories of classic rock bands like Pink Floyd and The Who. Do the classics still have a strong influence on your band?

We grew up in a small town where all we knew about Rock ‘N’ Roll came from classic rock radio. It wasn’t until we got to be 17 or 18 years old that we started stretching out and listening to other stuff. We definitely have some of that classic rock feel. The town we grew up in looked like it came straight outta a ZZ Top video.

I remember reading one article where the writer likened your band to a cross between John Cougar Mellencamp and Nirvana. I do see some similarities with Mellencamp, and the honest portrayal of Midwest life. How integral is the small town Midwest life in your songs?

It comes from writing what you know. We know growing up in the middle of Ohio, surrounded by corn fields. We didn’t have a lot of options growing up, so we had to make up sh*t to do. On Friday and Saturday nights you would drive out to the country and listen to Pink Floyd on the car stereo, and get high. There’s so many midwest kids that can connect to that because that’s how they lived, too.

I know among my peer group, there’s this feeling that you cannot be a success by sticking around in Ohio. Is there a temptation for you, to try it in a bigger town like Chicago or Austin, in order to find success?

I don’t think for us, moving away would be that beneficial. If you’re looking to be the next big thing it might help, but we’re more honest than that. We’re not looking for our big shot, rather, we’re in it for the long haul. I don’t see any major labels knocking on our door any time soon, so we’ll just stick around in Ohio, where it’s cheaper to live, and do what we do. Besides, we’re home here. Maybe you have go away for a little bit to appreciate it. Personally, I didn’t know how much I loved the area until we toured a lot and saw the rest of the country.

With the amount of touring you do, sometimes up to 200 shows a year, there have to be some really strange ones that you’ve had to do.

There’s been some crazy ones. We played this place called Guy’s Gumbo Shack down in New Hope, Alabama. Guy owns it, and he runs it himself. They didn’t have a PA or anything. We ended playing acoustic in the corner for like three and a half hours. That was brutal. There’s another one where we played a private party in New Jersey where this guy put some plywood over his kid’s sandbox and that was our stage. When you’re out doing it as much as we do you’re going to fall into some weird shows. They make you appreciate the good venues that much more.

Do you ever think about being able to dictate your own rider?

We talk about this question quite a bit. Socks and t-shirts. If you have brand new socks waiting for you at the club every day on the road, especially brand new ones, that would make living on the road pretty good.

That’s really true, I’m not sure why that happens. If you say you play rock ‘n’ roll, people act like they have no idea what you’re saying.

The ironic part is that we’re always looking for the “new,” but when you really sit down and listen to it, that new thing isn’t really new. How many bands do Joy Division and how many new bands do Daft Punk?

Everyone wants to hear something brand new. They want to jump on the next wave, like The Arcade Fire. People aren’t willing to accept that there’s only so many chords and so many instruments, and at this point pretty much everything’s been done. If it hasn’t been done, then there’s a good reason for it.

We hear it all the time, Two Cow Garage, oh, it’s nothing I haven’t heard before. We’re just a rock and roll band who works really hard and tries to write good songs. We’re not pretty. We’re raw and gritty. If you can’t appreciate that, then I’m sorry.

Recent news out of the Two Cow Garage camp finds the band looking for a new drummer. Whether they have their their permanent replacement behind the kit or not, they will still be playing the Beachland Tavern on August 25th with Brennan’s Revenge and Red Water Rojo.