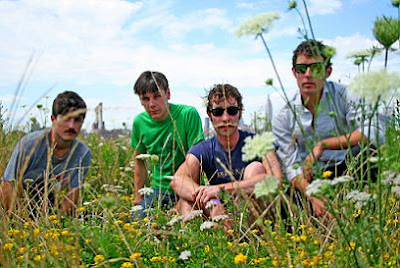 I can think of no better way to kick off the Three Minutes of Fantastic Rock Block, then with “Shim Sham,” the new single from Imperial Teen. It’s filled with fuzzy guitars, sugar sweet vocals, loads of Oh, Oh, Ohs, and, well, fantasticness.

I’m slowly winning the battle against my old rock phobias. For example, I no longer break out in a nervous sweat when I hear the phrase, “Double live.” I’ve also learned to overcome my fear of the phrase, “Self produced.” Yet, for all of my successes, there are still some phrases that send me to shiver: “Double studio”,”Jacknife Lee”, and “Bigger label,” to name a few. Bigger label can mean a major label, but it could also be a mid-major like Matador or Vice. I worry about Times New Viking moving to Matador and I worry about The Black Lips signing to Vice. I’m sure these fears are unfounded. Why would anyone try to tame these acts?

At least in the case of The Black Lips (pictured above), all early indications are that Vice will let these boys be as nasty as they wanna be. Their live album, Los Valientes Del Mundos Nuevo, came as close as possible to capturing their wild antics on stage, and “Cold Hands,” one of the first numbers to emerge from their forthcoming disc, Good Bad Not Evil, has left their trademark ragged, rumbling garage punk sound left unchanged.

One of the discs that has been spending some quality time with the I Rock Cleveland Soundsystem of late has been Big Eye Little Eye by the Canadian band, The Golden Dogs. I can’t say that I have any deep thoughts on this album. Really, all I can say is that if you like Superdrag, Sloan, or any other purveyor of Nineties power pop, then this album is one you’ll want to rock.

Stereogum has this feature called Quit Your Day Job. I’m thinking of starting one called Quit Your Day Band. You see, Turbo Stein, and Turbo John, are both members of Be Your Own Pet. I’ve listened to Be Your Own Pet’s debut, I’ve seen them live when they headlined with The Black Lips last year in Cleveland, and outside of a couple tunes, their day band really doesn’t do much for me. Now, Turbo Fruits, this is a band I can get into. If Be Your Own Pet is a band for bouncing off of walls, then Turbo Fruits, with their love for weed, are a band for sinking into sofas and munching cheese doodles.