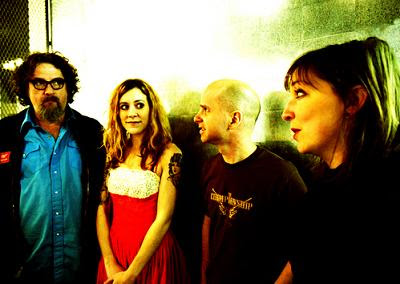 When I interviewed Lisa Walker of Wussy last year, the band were either about to enter the studio, or had just entered the studio, or were booking practice time before entering the studio, to record the follow up to 05’s Funeral Dress. That little bit of detail isn’t that important. What I do distinctly remember from that conversation is her assertion that the new album would rock a bit harder than their debut. I’ve yet to hear the new disc, Left For Dead, but judging by “Rigor Mortis,” they’re certainly delivering on that declaration to rock. At first, “Rigor Mortis” isn’t a great departure from Funeral Dress. It still has that distinct, rustic, Midwest feel to it, and the leads are still split between Walker and former Ass Ponys frontman, Chuck Cleaver. Then, there’s that guitar. That glorious fuzzy, crunching, feedback fueled guitar shredding like it’s 1993, delivering us to the promised land.

Left for Dead by Wussy will be out August 28th on Shake-It Records. Two cd release shows are scheduled, August 17th in Cincinnati at the Northside Tavern and August 25th in Columbus at Andyman’s Treehouse.