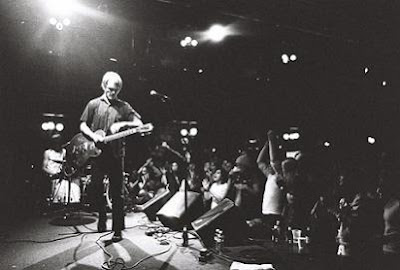 2006 was a tough year for The Two G’s. First they took a beat down from the critics over dropping N Bombs on their tune “Long Summer Day” from Waves of Grain, then they got a beat down at the hands of the HPD. It was an ironic turn for Adam Stephens (guitar/vocals) and Tyson Vogel (drums), two musicians who have always fancied themselves as outlaws running from town to town.

Did these beatings knock some maturity into Stephens and Vogel, or embolden their outlaw personas? Their catalog is filled with vagabond tales like “Steady Rollin’,” “Crow Jane,” “The Train That Stole My Man,” and “Las Cruces Jail.” Yet, on “Seems Like Home to Me,” from the moody, acoustic, Scenery of Farewell EP, there seemed to be a noticeable shift. Instead of appropriating someone else’s woes in a whirl of guitar fury, they toned down their sound and channeled their own throes. On the other hand, upon hearing “Despite What You’ve Been Told” and “The Hand That Held Me Down” from the Two Gallants forthcoming, self-titled release, it’s rather ambiguous if these outlaws are Stephens, or Stephens in character. Maybe that real life run in with the law made him a more believable story teller, or maybe I’m sensing a more refined voice. Either way, I find his narratives as compelling as they’ve ever been.

Two Gallants’ latest, the self titled Two Gallants, will be out September 25th on Saddle Creek. For the Cleveland Rockers, they’ll be at the Grog Shop on September 30th with Blitzen Trapper for what should be a most excellent night of music.