The Rockometer: Black Before Red, Nina Nastasia and Jim White, The Deathset, and Fucked Up 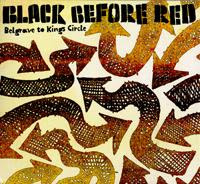 Black Before Red
Belgrave to Kings Circle
I Eat Records
2007

Belgrave to Kings Circle by Austin’s Black Before Red is the type of album I thought I was getting with the new New Pornographers disc — 11 pop songs with hardly a throwaway in the set ranging in sound from collaborative Canadian indie pop (“Underneath Gold” and “Bossa Nova #7”), classic Beach Boys and Beatles style songwriting (“Matagorda”) to American indie pop in the vein of The Apples in Stereo (“Waiting for the Bang.”) And unlike that Canadian supergroup who forgot to include the hits on their latest release, Black Before Red have included a number of highly hummable, ear-worm inducing gems. “Teenage America” is a perfect piece of power pop replete with sticky sweet “La la la’s,” “Aah Aah Aah’s” and “Bah Bah Bah’s.” “Halliberlin Petroleum” is the missing link between the space glam of Bowie and the space pop of Grandaddy. While “Goddess in Trauma” is a number full of shifts, subtle switches, and boundless melody, blissfully ignorant of its ambition.

Belgrave to King’s Circle by Black Before Red: 8 out of 10 on The Rockometer. 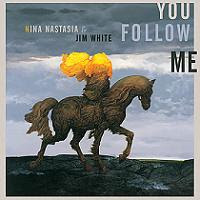 There are times when this whole using words to write about something that needs to heard and experienced thing seems like a completely worthless endeavor. I read a couple reviews for You Follow Me by Nina Nastasia and Jim White, and I found them hard to believe. You may read my review of this album and see the score at the bottom and find it equally hard to believe.

These songs on You Follow Me range from bare arrangements of voice, acoustic guitar and drum to bare arrangements of voice, acoustic guitar, and drum. Yet, I’m compelled to use such words as startling, captivating, beautiful, and brave. It helps when that voice is no ordinary voice, but one that can be haunting, vulnerable, passionate, or proud. It also helps that the man behind the drums is no ordinary drummer, but Jim White of Dirty Three, whose complex and adventurous rhythms steadfastly caress the calm moments, and rapturously punctuate the passionate ones. Just listen how he so accurately conveys the despair of a disintegrating relationship in fractured and frantic beats as Nastasia laments “I don’t believe in the power of love,” and “I don’t believe in a god or the mind” during “Our Discussion,” and how he’s able to seamlessly transition from barely audible, to wood floor rattling on “Late Night” as he skillfully mimics Nastasia’s emotional twists. For an album barely over 30 minutes, and one that appears so barren on its surface, there are endless joys to be found in the wistful interplay of nothing more than an honest voice, an acoustic guitar, and a set of drums.

I Write Down Lists by Nina Nastasia and Jim White: 9 out of 10 on The Rockometer. 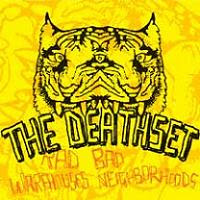 P.S. Skip the bonus cuts. I prefer this album much better when it’s 10 songs in 10 minutes. The remixes, at two and three minutes long, ruin all the fun.

Rad Warehouses and Bad Neighborhoods by The Deathset: 7 1/2 out of 10 on The Rockometer. 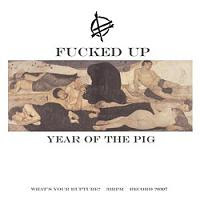 Fucked Up
Year Of The Pig
What’s Your Rupture
2007

I think this one falls into the category, “If it hasn’t been done before, there’s a good reason for it.” In all my years listening to music, and seeking out the newest sounds, I never asked for an epic, 18 minute, post hardcore song. Yet, when faced with the possibility to purchase Fucked Up’s “Year of the Pig” single with the epic, 18 minute post-hardcore a-side, I couldn’t pass it up.

The first six minutes saunter about on the back of steady, yet ominous bass line. The vocals alternate between the light innocent voice of guest vocalist Jennifer Castle, and the rough, bucket of nuts howl of Pink Eye. Things get interesting in the middle third, where organs, bongos, and guitars befitting of 18 minute post hardcore, collide. We’re at about the ten and a half minute mark and there’s still eight to go. It proceeds to flirt with space rock, falls in love with Motorhead, then at the 15 and a half minute mark, the original melody re-emerges with some extra heft. Really, this is all very fascinating. Would it help if I told you that the 18 minutes and 33 seconds of “Year Of The Pig” goes by faster than most 18 minute and 33 second songs? If you don’t check the time, you’d swear it was only 14 or 15 minutes long.

Really, the question of whether this song works or not is secondary to the fact that it was made in the first place. It takes gigantic, mega balls to even try something like this, and the fact that it remains an interesting listen throughout its duration is reason enough to give it a spin.

Year of The Pig by Fucked Up: 7 out of 10 on The Rockometer.