"There’s a Reason" and "Vice Rag" by AA Bondy 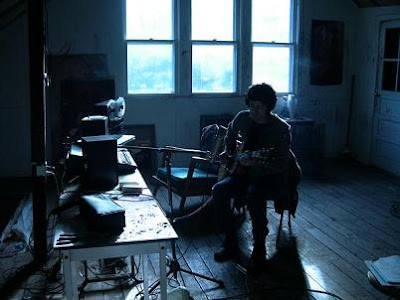 During the Nineties, and the early part of this decade, AA “Scott” Bondy could be found fronting the Birmingham, Alabama band Verbena. They made a few ripples in the music scene, made it to a major, and crashed in burned in 2003. I think I still have a Verbena cd, the one produced by Dave Grohl, hiding somewhere in my overflowing mess of a cd rack. After Verbena, Bondy soured on the whole music biz thing, and did his best Henry David Thoreau, by moving to The Catskills, swearing off music, and living the simple life. Something happened, the what isn’t that important, but whatever it was, it inspired Bondy to pick up his guitar and start writing again.

I find this little bit of back story helpful in understanding AA Bondy’s American Hearts. He has a slightly gruffy, worn-in voice bearing the scars of his past. His songs are barren and his words feel genuine. In a lot of ways American Hearts reminds me of Heartbreaker by Ryan Adams. When you listen to American Hearts you get that same feeling of intimacy that you get from Adams’ best work. It’s as if you’re with Bondy in that cabin in the woods with the full ashtray and empty bottles, working out life through song.

While American Hearts by AA Bondy isn’t due out in the usual places until September 18th, it is now available for purchase directly from Superphonic Records.