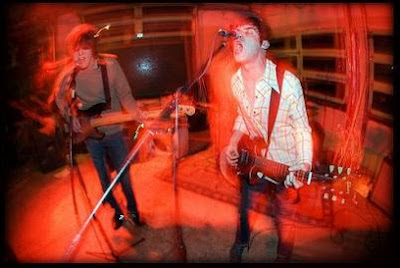 The Mannequin Men shouldn’t have to apologize for playing snotty, proto-punk and singing choruses about private school girls and the new nowhere generation. Since when did drawing inspiration from Iggy, The New York Dolls, Television, or Cleveland’s own Dead Boys mean you’re a meathead? Yet, in an age where we’ve created the micro genre literary rock for the smart kids, they’re interviews often include the defense, we’re smarter than you think (see recent features Paper Thin Walls and Aversion). If anything, it’s the other side that should be apologizing for making safe music and taming the spirit of Rock ‘N’ Roll. Lord knows, I’ve complained enough on these pages about bands over producing their work, and cleansing their sound of spontaneity and vigor.

Mannequin Men, you don’t have to explain yourselves to me. I’ll get gritty and crude down at the altar of Iggy with you. I’ll swear, spit and booze. I’ll dance the pigpen, too.

Fresh Rot by the Mannequin Men is due out September 18th on Flameshovel. They’ll be out on the road through September and October, and a Cleveland date is in the works. Check that myspace place for the latest.