Warning: "continue" targeting switch is equivalent to "break". Did you mean to use "continue 2"? in /nfs/c06/h01/mnt/88637/domains/blog.irockcleveland.com/html/wp-includes/pomo/plural-forms.php on line 210
 I Rock Cleveland I Rock Cleveland | A Whole Mess of Reasons Why You Should Check Out Dolby Fuckers 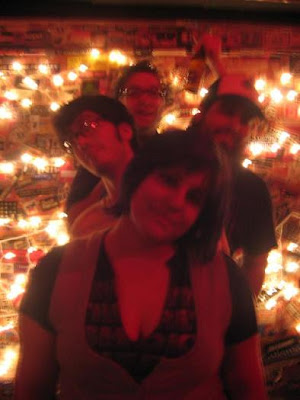 1. Their self-titled debut release just came out on We Want Action and it is highly recommended by my brother blog, Columbus’ Donewaiting.
2. They’re playing at Pat’s in the Flats tonight with not one, but two This Moment in Black History side projects: Buddy’s Short Rabbits and Lawrence’s National Suicide Day.
3. Yes, there’s a Browns game on tv tonight, but it’s only an exhibition, and you’ll have plenty of chances to see Brady Quinn once Charlie Frye and/or Derek Andereson prove to be utterly useless during the regular season. Besides, since Quinn got the buzz cut, his dream factor went down by like 207%.
4. Just look at that band photo of the Dolby Fuckers. They look like fine, upstanding Ohioans. If it had a caption, it would undoubtedly read, “Come see us play. We promise to put on a good show.”
5. Check out this tune, Pattern Dykes [download] 6. And this tune, Sharpshooter [download] 7. I forgot to mention in Reason #1, the self-titled release by Dolby Fuckers, recorded in glorious lo-fidelity, came out on old fashioned cassette tape (with a voucher for digital download). And this leads me to Reason #8…
8. If you don’t buy their cassette or go to their show how will they ever afford to record with proper equipment and make CDs?
9. Hold on a second, let me rephrase #8. Because Columbus, Ohio, with bands like Times New Viking and Dolby Fuckers, is once again, at the center of an exciting lo-fi movement in indie rock.