Warning: "continue" targeting switch is equivalent to "break". Did you mean to use "continue 2"? in /nfs/c06/h01/mnt/88637/domains/blog.irockcleveland.com/html/wp-includes/pomo/plural-forms.php on line 210
 I Rock Cleveland I Rock Cleveland | A Place to Bury Strangers or Psychocandy Revisited

A Place to Bury Strangers or Psychocandy Revisited 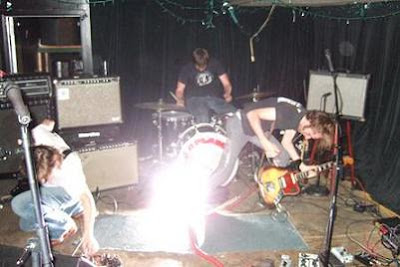 There’s this line you don’t want to cross. It separates inspiration from imitation. I don’t know exactly where this line is, I’m not sure any critic does, but I do know that it’s been getting pushed back this decade. Whether it’s Daft Punk disco, mopey post punk, or garage rock revisited, most of the major movements of late have been indebted to the past. Additionally, there’s a lot of subgenres I enjoy, including garage, power pop, punk, psychedelic rock and plain old vanilla Rock ‘N’ Roll, where the inspiration vs. imitation debate never even enters my mind, making the Stones’ chorus, “It’s only Rock ‘N’ Roll, but I like it,” my defacto rallying cry.

There’s this line you don’t want to cross and if A Place to Bury Strangers didn’t cross that line, then they’re standing right on it. Thanks to their reputation for ear splitting live shows, and a very complimentary review, they’ve found themselves the proud owners of a ticket to board the pitchfork hype train. Are they deserving of the ticket? Maybe.

Almost everything about this band is indebted to the Jesus and Mary Chain’s Psychocandy: the guitars that sound like power tools and vacuum cleaners, the vocals sound as if they came from a long lost Reid brother, and the production has the same hollow, echoing sound as if it was recorded in an empty, abandoned church. The rhythms do vary from Psychocandy. They’re more like circa 1980 Cure. Is that last detail enough to put them on the side of inspiration?

What do you think? On the line? Over the line? What’s this line you keep talking about?

I’ll tell you what happened when I listened to A Place to Bury Strangers last night — after three songs I had a sudden urge to youtube old Jesus and Mary Chain videos.

You Trip Me Up

Then, when the youtube wasn’t good enough, I put Psychocandy on the stereo. Man, that’s a great album.