"Get Off" by Dragons of Zynth 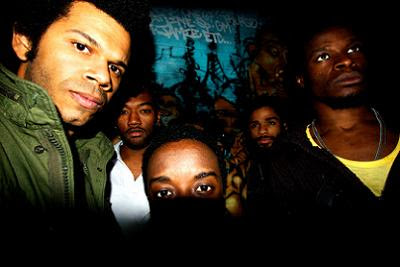 Just as I’m about to write off The Aughts as an underwhelming, decade devoid of its own ideas, and just as I’ve gotten used to the fact that lo-fi may be as good as it gets these days, someone comes along and reminds that there are still limitless possibilities in popular music.

Although Dragons of Zynth are bound to receive comparisons to another African-American fronted band from “The City” who play an amalgamation of rock, punk, soul, jazz and junk, a comparison reinforced by the production work of TV on The Radio’s Dave Sitek on their debut, Coronation Thieves, they are entirely their own rock monster. There is so much going on in this tune, “Get Off,” that it demands your attention. It was recorded with Massive Attack An earlier version of this track was recorded at the Bristol studio of Massive Attack, and you can definitely hear the influence of the UK’s trip hop pioneers in the scratchy, static shuffle of the opening beat, and the accompanying, loopy, repetitive bass line. You’ll also encounter backwards tape loops, and some soulful sounding sax in the opening groove that’ll undoubtedly take you back to those wasted days spent with This Is Mushroom Jazz Vol 1 and big spliffs. Yet, as pleasant as that groove is, it isn’t meant to last. A riotous blast of guitars abruptly eliminates any thoughts of an acid jazz revival.

Coronation Thieves by Dragons of Zynth will be out on Gigantic on September 25th and they will be playing in Cleveland at Tower 2012 on the following day. There’s a Cleveland connection here, too: the frontmen of DOZ, Aku and Akweety O.T. were both raised in good old Clevo.