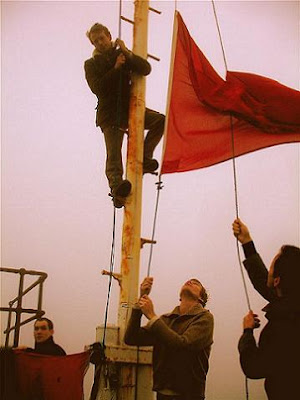 Some may consider the British Sea Power’s Yan, your typical bullshit artist. I prefer the term genius. On the title of his bands latest EP, he had this to say, “The title of the EP is Krankenhaus?, which is German for hospital. This could equally allude to the healing and/or life-saving qualities of indie rock music, or perhaps the vast quantities of pharmaceuticals associated with both of these. The green cross adorning the front could be the one used to locate a chemist’s, or maybe a symbol of a new ecological religion. The answer is up to you.” Even more confusing was the release for the announcement of BSP’s upcoming tour, “As leading creatives in London, Milan and Riga turn their minds to key Autumn style decisions, British Sea Power can exclusively reveal what will be turning heads and sticking out of your must-have Gore Vidal casual clutch. Get ready for Middle Eastern moves, a US twist on Beast Of Bodmin chic and another portion of the ever popular piratical hip. Achtung zeit-types! Attention ur-gurus! Heads up Eddy Slimane and all-new meta-muse Bonnie Raitt!” He’s obviously on some other level (or some other drugs, if you’re in the bullshit camp) than you and I.

So, what does all this mean in relation to “Atom,” the first song to emerge from Krankenhaus? Let’s just say, this one is epic. This one is massive. It’s massively epic. Load “Atom” onto your personal soundsystem, and prepare for your lame ass to be rocked.

Krankenhaus will be out digitally October 8th in the UK on Rough Trade and the following day in North America on Rough Trade/World’s Fair. The physical release won’t be available until November 20th.