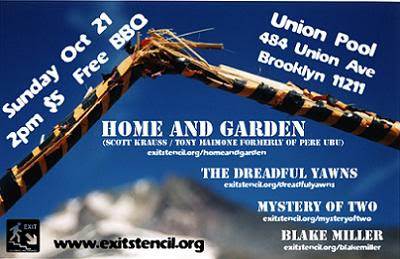 It’s that time of year. NYC’s annual musicfest/boozefest/smoozefest kicks off one week from today on Tuesday, October 16th, and Cleveland’s Exit Stencil Recordings will be there. The Exit Stencil BBQ will take place 2:00 PM on Sunday, October 21st at Union Pool in Brooklyn and will feature Home and Garden, The Dreadful Yawns, Mystery of Two, and Blake Miller. BBQ is included in the price of admission, and both Veggie and Meatie options will be available.

The Dreadful Yawns (5:00) The last band signed by Greg Shaw to Bomp! Records, and more importantly, this psychedelic rock band from Cleveland have been playing some of the best shows on the local circuit this year.

Mystery of Two (4:00) The new breed of Cleveland avant rock. Mystery of Two’s debut, Arrows Are All You Know, is murky, dirty, and riveting Rock ‘N’ Roll that is the sound of the Cleveland underground.