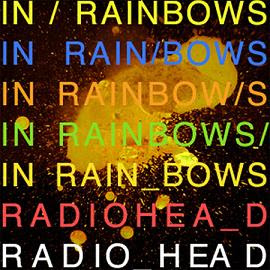 This is the second part of a multi-part series looking back at Radiohead’s In Rainbows.

It Was Like a Midnight Sale, but Not Really

If you were a voracious music consumer before the advent of the digital age, then like me, you have a soft spot in your heart for the traditional midnight music sale. I can remember many nights in college where I would be lined up outside Madhatter Music in downtown Bowling Green, Ohio waiting ever so impatiently for those doors to open when the clock struck twelve. While in line, I’d be talking (note, I said talking not im-ing, texting or emailing) with the other people in line, finding out if we were waiting for the same release, and if we were, I was mapping the store out in my head, secretly plotting how I’d get my hands on it first.

It’s hard to explain how something like walking up to a cash register to buy a cd can make your heart beat faster, or the competing feelings of excitement and relief after you’ve bought the disc and you’re finally holding a copy of a cd in your hands that you’ve been anticipating for months, if you never went to a midnight sale. It’s so hard to explain to someone who’s come of age in the midst of the leak culture why it made such a big difference to buy The Downward Spiral at midnight instead of noon. CD releases used to be an event. I’d grab my friends from down the hall, and some beers out of the refrigerator and we’d do nothing more than listen to music until the early hours. These days, it’s as if the leak is the event, and the release of the disc is nothing more than an afterthought.

Somehow, waking up on the morning of October 10th, and clicking on a download link wasn’t quite the same experience as a midnight sale, but in the digital age, it may be as close as I’ll ever get. Still, there were was one key similarity: the long forgotten sense of anticipation. It grew steadily from the evening of September 30th to the evening of October 9th. The whole internet was abuzz with Radiohead talk. I surrounded myself by it. I read everything I could, with one notable exception, I purposely stayed away from any story linking live versions of songs from In Rainbows on youtube. I wanted the complete experience of listening to every song on a cd for the first time.

My first few attempts at listening to In Rainbows didn’t go so well. Instead of buds and beers and carefree college living, I had a cubicle, a phone, and a computer with people constantly calling for one thing, and emailing for another. It’s not easy to talk on the phone with an earbud in one ear and act like you’re actually listening to the person on the other end. You end up hearing neither the person on the other line asking why the numbers you published are .01 lower than their numbers nor the album you’ve been eagerly waiting to hear for 10 days. I tried my best to get through In Rainbows back to front that morning, but after three, four, or five false starts, I waited until the lunch hour for my quality time with Radiohead.

And on the 11th Day, The Internet People Rose in an Uproar, Much Like They Did On the Ninth Day

“If we didn’t believe that when people hear the music they will want to buy the CD, then we wouldn’t do what we are doing.” What in the name of Good Golly Miss Molly were Radiohead’s management team thinking when they made those comments to the UK music publication Music Week? Was all of our goodwill and all of our money nothing more than a well orchestrated marketing scheme? Was this why In Rainbows could be had for free?

James Montgomery, for MTV news, tried to put both fan revolts into perspective:

In the end, it’s really all about a series of intangibles — kilobits per second, fan loyalty, etc. — that makes it difficult to tell if Radiohead fans are upset because of a whole bunch of miscommunication, or if there was some less-than-honest business being done by a band not exactly known for being cold and calculating. Then again, it’s also entirely possible that Thom Yorke and company tried to do something different with Rainbows, and as is the case with being first, they might not have gotten it right.

A second thing to consider, is that the time of this interview, Radiohead were (and are still) a free agent. If you’re a label and you’re looking to get Radiohead to sign on the line, what kind of statement do you want to hear from management? One that indicates that even after a high profile digital sale, there will still be a market for a cd, or one that reads In Rainbows digital release has been a resounding success and every Radiohead fan is perfectly happy with their mp3s. Of course, management is going to go to the press, and try to convince the old guard that there’s still a market for an album that more than 1 million people have already downloaded. Was Radiohead being dishonest with their fans? I’d like to believe they weren’t. Was Radiohead’s management publicly negotiating a contract for the band through the press? Yes. Could management have worded their statement better, so as not to offend the people who already paid money for In Rainbows? Absolutely.

The Early Numbers Are In.

The most current reports I’ve read have estimated that nearly 1.3 million people have downloaded In Rainbows. Additionally, while more than half of the users chose to download the album for free, the average amount paid has been reported to be between $5 and $8, placing Radiohead’s initial take somewhere between 6.5 and 10.4 million dollars. Even if those estimates are too high, and the $8 average does seem high when you figure that pushes the average price for those who used the tip jar to more than $16, Radiohead still cleared millions of dollars and Radiohead’s In Rainbows experiment must be considered a success, right? Other bands will surely follow Radiohead’s lead, right?

Let’s not jump to conclusions. In an interview with Gothamist, where Johnny Greenwood of Radiohead, was asked about the pay what you want model, he responded, “It’s just interesting to make people pause for even a few seconds and think about what music is worth now. I thought it was an interesting thing to ask people to do and compare it to whatever else in their lives they value or don’t value.”

I’m looking back at those statistics and can that be true? More than 50% of people who downloaded In Rainbows saw no value in it? Man, that’s depressing. I don’t regret for one minute my decision to give Radiohead $6.50 to be able to listen to their new album ten days after it was completed. I didn’t regret the decision when I fought their busy servers to place my order. I didn’t regret it when I found out that the album was ripped at a mid-quality level, or when Radiohead’s management made that unfortunate statement, and I certainly didn’t regret my decision after I heard the album. When I think of all the stuff I’ve wasted $6.50 on in my lifetime, and all the times I’ve wasted $65, $165, or more on truly regrettable purchases (shiny silver pants and a shiny silver shirt for NYE 1999 immediately come to mind, as does that Louis XIV cd, Camel Lights, the snowboard in my closet that hasn’t seen snow in years, a talking toilet paper dispenser, and The Ding King as seen on TV) a new album by Radiohead for $6.50 is a bargain. I drank at least $40 in beer last weekend, and all I got for that was hangover on Saturday, and a god-awful Monday morning. If Radiohead can’t convince more than 50% of their listeners that there’s value in recorded music, then who can?

Another thing to consider before proclaiming self-releases and tip jars the wave of the future, is the stature of Radiohead before the In Rainbows experiment. Years of being on a major label, and years of quality, compelling releases provided them with the capital need to pull this off on such a grand scale.

If there is one act that is in position to follow Radiohead’s lead, it’s Nine Inch Nails. Trent Reznor of NIN is a free agent, he has a fan base that’s as devoted Radiohead’s fans, he has a couple landmark albums of his own (Pretty Hate Machine and The Downward Spiral), and he has also benefited from the exposure and investment of a major label. Oasis have also been mentioned as a band who may go it alone. I don’t know how well they’re regarded in England these days, but from here in the States, I can’t imagine a self-released, digital album by Oasis having the same kind of impact. If I was given the choice to donate for a new Oasis record, I’d give $2, maybe $3. I’m not convinced the Gallaghers have any good songs left in them.

Back to Part 1: Pre-release buzz, piracy, pricing, and bit rates