In Rainbows Redux Part 4: The Review 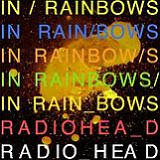 “It’s just interesting to make people pause for even a few seconds and think about what music is worth now. I thought it was an interesting thing to ask people to do and compare it to whatever else in their lives they value or don’t value.”

–Johnny Greenwood on Radiohead’s name your own price album release

Lost among the myriad of think pieces on whether Radiohead were or were not changing the recorded music industry was the question posed by Radiohead’s Johnny Greenwood, “How much is it worth to you?” Some, like myself, took the question seriously and asked themselves how much recorded music should cost. For others, the price was nothing, as Radiohead’s website would allow the purchase of In Rainbows for little more than a small service fee. Still, others were willing to pay $80 for the deluxe 2CD/2LP set.

When you think about it, the question of music’s worth in today’s market, is all the more striking when it comes from a band like Radiohead. After all, they are responsible for OK Computer, an album many consider the greatest of the past ten years. Surely, on the basis of their past accomplishments alone, there must be some value to In Rainbows. Yet as fascinating as the question of value may be, to put a price on a band or an album by a particular band, almost trivializes the art contained within a compact disc, on in the case of In Rainbows, encoded in thousands of bytes. A great album, one that sticks with you for years, is worth far more than the purchase price. Is In Rainbows such an album? Or, is In Rainbows rapid ascension, merely a product of its sensational release strategy?

On first listen, it’s easy to see how the early reviews matched the pre-release hype superlative for superlative. In Rainbows is Radiohead’s most instantly accessible album since The Bends. Unlike Radiohead’s later releases, there is not a learning curve for the listener. In fact, it’s so accessible that it almost feels out of place when placed chronologically within their catalog, as indulgent audio experiments and complex textures have been exchanged for a set of songs that are strikingly song-like, and considerably more organic. Stylistically, it’s not a continuation of the Kid A, Amnesiac, and Hail to the Thief arc. Instead, it can be more appropriately grouped with The Bends and OK Computer.

Perhaps, that conflicting sense of place would explain why opening number “15 Step,” as well as “Weird Fishes/Arpeggi” feature drum ‘n’ bass rhythms that have been out of vogue for a few years now. “Bodysnatchers,” also feels strangely out of time. Radiohead have not indulged themselves in this type of guitar grandeur since The Bends. It is certainly welcome and refreshing, however, it may not be exactly what you would expect from a band noted for continually pushing the evolution of sound.

As In Rainbows is an immediate album, many of the pleasures contained within are simple: the thick, warm bassline of “All I Need,” the raw emotion, unburdened by extra effects, on the piano ballad “Videotape,” and the pleasant, atmospheric groove of “House of Cards.” These moments will surely satisfy the listener who wants to revisit the period of the band’s evolution that was passed too quickly. However, for those who’ve grown accustomed to Radiohead challenging their assumptions about Radiohead, this may not be enough. Is In Rainbows an album that’s five, or ten years too late? Is it an album that will still be remembered in five years? It all depends on what you, as the listener, value in Radiohead: immediacy and familiarity, or adventure and complexity.

In Rainbows by Radiohead: 8 out of 10 on the Rockometer.