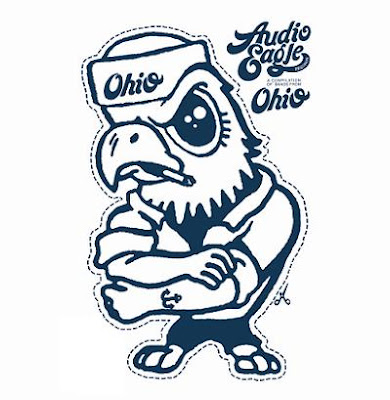 Obviously, with a name like “I Rock Cleveland,” I’m a big fan of Ohio rock music, and I’d like to think you, the regular IRC reader, appreciates all the bands I’ve covered from Cleveland, Kent, Akron, Columbus, and the rest of the Buckeye State. So, I think it’s safe to say, you’re a big supporter of Ohio rock music. Well, Audio Eagle, the label started by Pat Carney of The Black Keys, who has released albums by Beaten Awake (Kent), Houseguest (Akron), and Gil Mantera’s Part Dream (Youngstown), are big supporters of home grown Rock ‘N’ Roll, too. Their latest release, A Compilation of Bands From Ohio, features 21 artists from across the Buckeye State. I’ve seen and/or heard roughly 61.9% of the bands on this disc, so I can say with a 61.9% degree of confidence that this is a solid release.

Now for the good part. After some extended negotiations with Audio Eagle (Actually, they consisted of me saying, “Hey, why don’t we run a promotion on I Rock Cleveland to hook up a couple of my readers with the new disc?” and Ted from Houseguest/Audio Eagle saying, “Great idea,”) I’m able to announce the “Why Don’t We Hook Up A Couple Readers of I Rock Cleveland With The New Audio Eagle Compilation Contest.”

Since I like to keep these things simple, all you need to do to enter is send an email to IRockCleveland [at] gmail [dot] com with the subject line “Audio Eagle Contest.” The contest will stay open until midnight Thursday, November 8th, and the winners will be selected randomly from all entries. I will notify the winning entries via email on Friday, November 9th.

A Compilation of Bands From Ohio by Audio Eagle Records:

The Legal Stuff: Neither I nor Audio Eagle will give your email address to any third parties. Your email address will be discarded at the conclusion of this contest. I don’t have the exact number of discs available for the contest, but there will be more than one winner. Sorry, international rockers, this contest is open to US rockers only.