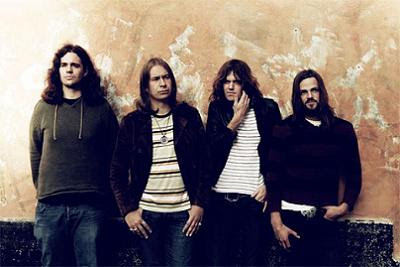 In the past week, I’ve picked up two releases by Witchcraft: their self-titled debut, and their latest release, The Alchemist. What’s most striking about this Swedish metal band is how they sound like they came from the Seventies. Note, I didn’t say their sound is influenced by early metal releases from the seventies, or how they’re a part of some heavy music revival. Rather, I really believe they came from the Seventies. It’s like these albums were shelved years ago and they were collecting dust in some long abandoned warehouse, only to be re-discovered and repackaged for release. I bought the debut as an mp3 download from eMusic and spent my Saturday afternoon tracking down The Alchemist on disc. Both sound like vinyl. On the title track from The Alchemist, Magnus Pelander sings of being 1,000 years old. I don’t believe him. Now, if he said he was 50, or 60 years old, I’d find that entirely plausible. That would make him old enough to be riffing around during the dawn of metal.

The other impressive aspect of Witchcraft’s sound is how they manage to sound heavy without playing heavy, or relying technology to make them heavier. Part of this comes from their analog studio techniques that make even digital formats sound vinyl, and equally important is their style of playing — it’s what metal sounded like before it divested itself of the blues and became obsessed with volume, speed, shock, and screaming. The riffs are base, sinister bastard sons of classic rhythms, the mix is spacious, and the vibe is wicked and mystical.

No one’s going to mistake Witchcraft for Dethklok, the most metal band of all the land, but with songs about magic, kings, dragons, demons, satan and such, there’s no mistaking whose side they’re on, either. I suspect there’s more than one god up in Valhalla happy someone is making metal the way it was meant to be done.

Witchcraft will be at The Grog Shop on November 27th with Radio Moscow and Hell’s Information. The Alchemist is out now on Candlelight Records.