Warning: "continue" targeting switch is equivalent to "break". Did you mean to use "continue 2"? in /nfs/c06/h01/mnt/88637/domains/blog.irockcleveland.com/html/wp-includes/pomo/plural-forms.php on line 210
 I Rock Cleveland I Rock Cleveland | "(My Head)/RIP Allegory" by Times New Viking 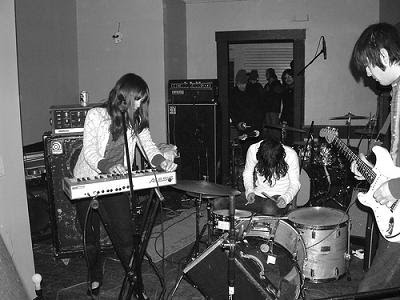 Those of you who were concerned that Matador Records would somehow change Times New Viking can stop worrying. If anything this two song sample of “(My Head)” and “RIP Allegory” from their forthcoming 7″ single, sounds lower-fi than their lo-fi material on Siltbreeze. Lower than lo-fi, you’re asking? I know. I didn’t think it was possible either. “(My Head),” features their double treble attack of organ and guitar pushing recording levels way past their peak, obscuring, but not eliminating, one of their strongest melodies to date. While Part 2, “RIP Allegory” sounds like a tiresome hipster dance party shot through a blender, and relayed through the ear piece of an old cell phone, transforming it from some smug navel-gaving affair into a joyful ruckus.

Rip It Off is due out January 22nd on Matador Records. The band will be in Cleveland on January 26th at the Beachland headlining a massive bill in both rooms put on by Radio Dystopia that will also include The Homostupids, Sword Heaven, Sun God, The Black Swans, The Deathers, Necropolis, and Brian Straw.