"God Will Protect the Naive" by Unsparing Sea 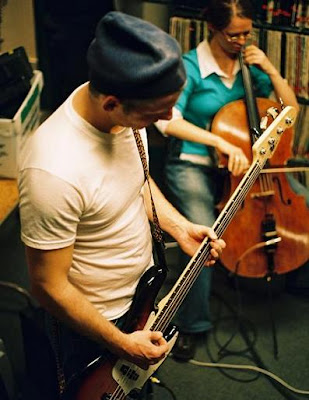 Cleveland and nautical inspired folk music may seem like an odd pairing. Sure, we have Lake Erie, Commodore Oliver Hazard Perry, and the War of 1812, but when you look at the modern shoreline and see a highway running along the coast, an airport to the east, and heavy industry to the west, there’s little to be romantic about. Yet, it’s the boundless possibilities of the open waters that helped shape the debut album, A Cloud in the Cathedral, by Cleveland’s Unsparing Sea.

“God Will Protect the Naive” is quite literally the calm before the storm. As a slow, steady wave ebbs and flows from the string section, a simple four measure melody struggles to have itself heard. It moves from guitar to voice and its echoes can be heard in the cello, but it’s never strong enough to overcome the constant hum. The vocals of singer/songwriter J.R. Bennett are hardly audible until three minutes in, when you can discren the plea, “God direct me. Please protect me.” The waves may strengthen, and the cymbals may gently rumble in the distance, but he’s rarely threatened, and the storm never appears. For now, at least, there’s safety to be had in the constant sounds of the sea.

A Could in the Cathedral by Unsparing Sea is one of the most pleasant surprises to emerge from the Cleveland music scene this year. I will definitely have more on this album in the coming weeks. When I emailed JR Bennett concerning its availability, he assured me that it will be out soon-ish. Music Saves and Bent Crayon should have copies within the next couple days. If you can’t make it out to one of these Cleveland stores, I’m sure if you contact the band through myspace, then they would surely help you out.