"See and Be Scene" by The Hard Lessons 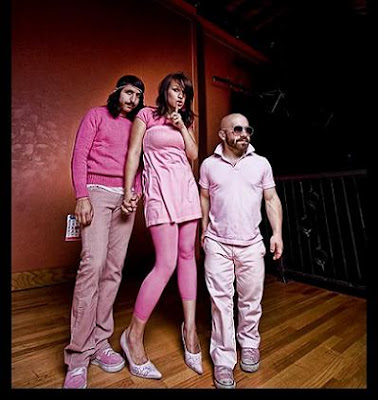 Where have all the moogs gone? There was a time, oh, I don’t know, maybe five or so years ago, where all the cool kids were infusing their guitar pop with whirling, swirling moogs. Like you, I thought the moogs were gone for good, until I happened upon the new single by Detroit’s Hard Lessons, “See and Be Scene.” The formula is pretty standard. Verse, chorus, keyboards doing the aroo-ooh thing, guitar solo, verse, and chorus. Next, throw in some lyrics about scenesters behaving vainly, “The boys are wearing girls clothes/Nobody knows just where they go/And the girls in their makeup and curls/Trying to see, see and be scene.” Lastly, add in the hooks, hand-claps, and sing-alongs, and you have an instant geek-rock classic. It may be formulaic and predictable, but damn, it’s so upbeat and poppy, and it feels so good. I can’t help but rock it.

“See and Be Scene” is the first of a four part series of limited edition, collectible singles by the Hard Lessons for Quack Media titled B&G Sides. Volume 1 can be downloaded now for free from The Hard Lessons website, and those of you into the physical release, can order volume 1 from the Quack Media store.