"The Basement/Enfant Terrible" by Yea Big and Kid Static 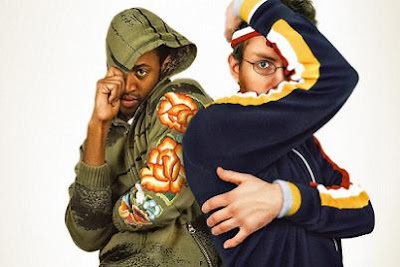 I remember the night of August 8th, 2007 just like it happened 3 1/2 months ago. The Mae Shi came to town with the Chicago hip-hop duo Yea Big and Kid Static to play the Cleveland DIY Venue Tower 2012. It was hot that night. So, hot that both bands played the entirety of their sets in nothing but their skivvies. Initially, this seemed like an odd pairing. No, not the heat and dudes in their underwear. That’s what dudes do when it’s hot. I’m talking about the noise punk band from LA and underground rap duo from the Midwest.

Ultimately, it turned out to be a memorable double bill. Yea Big and Kid Static did their best to engage the 20 or so people sweating their collective asses off, and even got some of the crowd to shake those asses. You got the feeling that they were genuinely happy to be performing in front of 20, and they would have had the same energy if there were only two people there. Later in the night, at the conclusion of The Mae Shi’s set, they returned for a joint performance of the mash up “Run to the Facts.” Admittedly, it was a little rough — the two groups hadn’t practiced the tune together before the night’s soundcheck. Still, it was memorable, and on my way out the door, I picked up Yea Big and Kid Static’s Mae Shi mash up disc, HLLLYEA.

Listening to Yea Big and Kid Static’s new disc now, I find that their sound isn’t too dissimilar to that of The Mae Shi. They rap over beeps, sweeps, and creeps from a laptop, while The Mae Shi make techy, glitchy sounds from guitar, bass, keyboards, and some strange, salvaged keytar-ish instrument. They’re like the Public Enemy and Anthrax for the glitch rock crowd. Or, the Aerosmith and Run DMC. Or, the Limp B…You get the point.

The self titled release by Yea Big and Kid Static is out now on Jib Door.