"Pinkies" by The Big Sleep 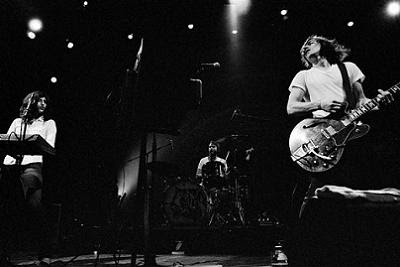 When I’m an old dude and my hearing’s completely gone, one of the band’s I’ll be cursing will be The Big Sleep. They won’t be the only band to blame. Mogwai will have a lot of guilt on their amps, and A Place to Bury Strangers certainly have something to say about permanent damage, as well. Still, I have a very distinct memory of seeing The Big Sleep the last time they came through town and barely being able to hear this voice in my head over their damaging din, “Stand back from the stage, dude.” It could have gone down like that, or maybe I needed another Pabst from the bar. Either way, this Brooklyn trio was loud.

On “Pinkies,” the first song to emerge from The Big Sleep’s forthcoming album, Sleep Forever, they’ve added a new element to their omnipresent wall of fuzz, a melody that’s equally as large. Back in the day we’d call “Pinkies” a radio-ready single. However, since radio isn’t really an option for many these days, we’re left with terms like blog ready or ipod friendly. Neither of which sound like much of a complement for such a big rock song like “Pinkies,” one that deserves ear splitting volumes and gut rumbling subwoofers. Tinny laptop speakers just don’t do it justice.

The Big Sleep’s Sleep Forever will be released on February 19th on Frenchkiss Records.