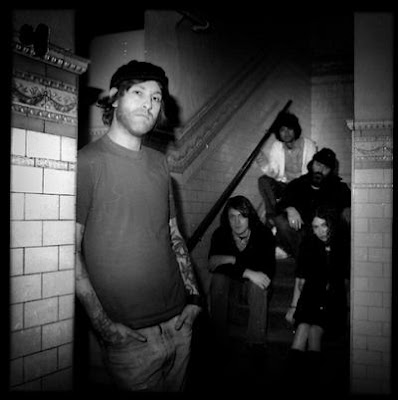 Altough they haven’t reached Uncle Bob Pollard levels of productivity yet, the Black Mountain Army have proven themselves to be quite the prolific musicians in their own right. Matt Camiard and Joshua Wells of Black Mountain account for two-fifths of the rustic Americana rock band, Blood Meridan, whose latest release, Liquidate Paris, just came out on Elevation Recrodings. Earlier in the year, Wells and Amber Webber (also of Black Mountain) released an album of sparse and chilling ballands as Lightning Dust. Lastly, the proper Black Mountain album, In The Future, is due out this coming January, and by all accounts it is going to be one enormous, riff roaring slab of acid rock.

While my wild anticipation for Black Mountain’s In the Future did play some part in my decision to pick up Liquidate Paris, you don’t have to be someone who celebrates the Black Mountain Army’s entire catalog, like myself, to dig this disc. There aren’t any 16 minute freak out jams, or space truckin’ excursions on this one. Instead, Blood Meridian keep their dark, damaged country rock nice and concise with nine jams in the same time Black Mountain would kick out two, maybe three numbers. It’s perfect for those nights when Dual Dopper XL, Doppler 5000, and the plain old Doppler Radars are predicting lake effect snow for the North Coast, and all you want is some sad, ragged tunes and a six pack.

For those who picked up Blood Meridian’s 2006 release, Kick Up the Dust, “The Burning River of Guilt,” will sound like a bit of a departure for the band. It has this interesting juxtaposition of influences where the swirling psychedelic pop may recall the Dandy Warhols, but Camirand’s vocals add layers of grit, dirt, and determination to the mix. While our second featured track, the boozy ballad “Alice (Have We Met?),” finds Camirand at the familiar position of last dollar, last beer, and last cigarette at the empty end of the bar as a slow, painful strum of an acoustic guitar commiserates with a lonely electric wailing way off in the distance.

Liquidate Paris is out now on Elevation Recordings. This is a limited edition release on cd and vinyl with only 1,000 copies available in each format.