Warning: "continue" targeting switch is equivalent to "break". Did you mean to use "continue 2"? in /nfs/c06/h01/mnt/88637/domains/blog.irockcleveland.com/html/wp-includes/pomo/plural-forms.php on line 210
 I Rock Cleveland I Rock Cleveland | "Where Serpents Held Esteem" by Unsparing Sea 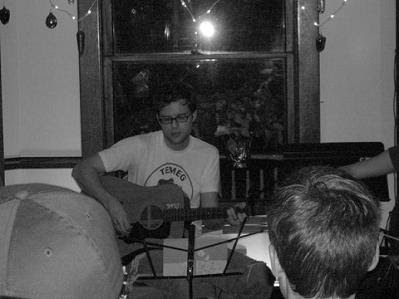 Listed in the Big Book of Rock Rules, between Rule #6, “Bottled water is for nine piece indie pop bands with xylophone players and hand clap girls,” and Rule #8, “Bigger doesn’t mean better, it means bigger,” is the all important Rule #7, “When recording a debut disc, err on the side of brevity.” Even if you’re convinced that you’ve completed your masterwork, and it’s sure to garner an eight, or maybe even a nine from Pitchfork, save the extra songs for later. If you survive, or by chance thrive on your debut, then by all means give us 60 minutes more.

Thankfully, Unsparing Sea, didn’t consult the Big Book when they recorded their debut, A Cloud in the Cathedral. At nearly 60 minutes, the songs and their sentiments, are epic and grand, and at times, even recall the lionized work of Jeff Magnum and Neutral Milk Hotel. And instead of finding filler within those 60 minutes, a fear which fuels my skepticism of long, ambitious debuts, I continue to find songs, and moments inside of those songs, that make it even more endearing.

On “Where Serpents Held Esteem,” Unsparing Sea’s JR Bennett returns to his familiar motif of the open waters. Like “God Will Protect the Naive,” where there was comfort and shelter to be found in its steady ebb and flow, the sea again presents itself as a beacon of hope during a time of bewilderment. It opens with an eerie howl slicing through the gentle swing of acoustic guitar and cello, as Bennett surveys the landscape of a desolate California, decimated by the collapse of the coast line. As he sails onward from the shore, he can feel the spite of the fish in the ocean aimed at the entirety of the human race, causing him to lament, “Humans are more foulable than the animals we eat.” You can feel the tension in Bennett’s voice. It wavers as if it’s been roughed from weeks of being subjected to cold, salty winds. Unsurprisingly, when he does find his muse, there is no respite, and he finds no answers, “I met a woman in the water who sang and read my palm/And as we reached the shore she sang my future in a song/ She said, “The body is a vessel and your soul is a seat/ and that the human heart grows heavier with each person you meet.”

Please pardon my pun, but Unsparing Sea have started to make some waves on the local scene. In addition to scoring one of my top NE Ohio releases from 07, they were recently named one of the Cleveland Free Times’ 10 Bands to Watch in 2008. Their debut disc, A Cloud in the Cathedral, is out now and is available from the band’s website or myspace.