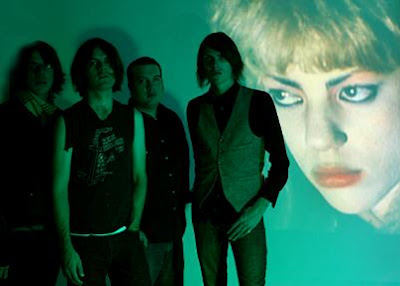 Welcome to the state of weird, a place you may know by its more commonly used name, Oklahoma. It’s the home of The Flaming Lips, the elder statesmen of weird, and consequently, the state with the highest per capita ownership of super hero costumes, confetti canons, and mega-sized balloons. It’s also the home of young up-and-comers, Evangelicals, a band who certainly shares the Lips affinity for mind-warping, interstellar rock.

It’s a safe bet to say that Evangelicans probably don’t have as many weapons of weird at their disposal as Wayne Coyne and company, still, they can certainly turn a tune into a wide-eyed carnival of sounds. Take “Skeleton Man,” from their forthcoming Dead Oceans release, The Evening Descends, a song where guitars climb up, down, and all around a vast menagerie of sounds including vintage video game tones, ghostly howls, and sinister laughter as it builds to a wild, head-spinning crescendo. Who needs confetti canons?

The Evening Descends by Evangelicals will be out January 22nd on Dead Oceans, and for the locals, they will be at the Beachland Tavern Monday, March 3rd with Headlights and Hallelujah the Hills.