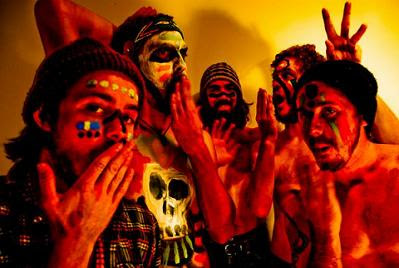 “Come on over bros. Grab your bongos. Grab your congas. Bring your accordions, horns, and gee-tars. We are going to jam tonight!”

State Bird’s “The Golden Glowing Mask” certainly has that impromptu jam session feel to it, and the accompanying band photo featuring young, bare chested men in war paint screams “Freak folk.” Yet, it takes a decidedly pop turn at the midway point and is wrapped up tidily in just over three-and-a-half minutes, making it one of the more economical excursions to the outer limits of the mind you’re likely to encounter. How 21st Century of them! With the specter of global warming all around us, and stressed natural resources pushing gas prices higher and higher, everyone has to do their part, and these freaky folk are more than happy to cut back on extraneous solos for the good of future generations.

Mostly Ghostly by State Bird will be out February 26the on The Record Machine. Also, State Bird will be appearing as part of The Free Times two day 2008 Band to Watch showcase taking place Friday, February 8th and Saturday, February 9th at The Beachland Ballroom. Friday’s show will feature Afternoon Naps, To Be a High Powered Executive, Lunavelis, Unsparing Sea, and State Bird. While On Saturday night, Living Stereo, Venomin James, MuAmin Collective, Gravity and Eternal Legacy will take the stage.