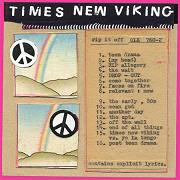 Now on Matador Records, Columbus, Ohio’s Times New Viking are following the same trail blazed by their lo-fi forefather, Robert Pollard, and his band Guided by Voices, whose Alien Lanes was released on Matador 13 years ago. It isn’t coincidence. In an interview with Stylus published shortly after Times New Viking released Present the Paisley Reich, their second album of lo-fi, fuzz pop for their former home Siltbreeze, they were asked about their courtship period and why they chose Matador over Subpop. Guitarist Jared Phillips was quick to reply, “Alien Lanes.” While it would it be expected for a group from the middle of Ohio to admire the work of Pollard, just as important is how Matador handled Guided by Voices, letting them continue their adventures in lo-fidelity and not pressuring them to change their sound for the sake of marketability.

Now, implying Times New Viking haven’t changed their tune, and claiming they’ve gone and recorded the same album the third time are not the same thing. The production is still dominated by fuzz and hiss, and recording levels are still redder than red, but as their melodies have gotten tighter and their song writing has gotten stronger, it’s becoming more and more difficult for them to hide behind the snap, crackle, and pop of their trusted, busted sound.

If Times New Viking weren’t so adamant in their battle against fidelity, a treble-kicking stomp like “(my head)” could pass for a number by The Pixies of The Breeders. Similarly, the fractured waves of distortion heard on “Relevant: now,” do their best to conceal a modern, shoegaze style drone. Their move towards twisted pop is even more apparent on the quick one minute hits of bouncy, ragged, romping like “DROP-OUT” and “The Apt,” and again on “The Early 80’s” and “Another Day,” where no measure of hiss can hide these paisley patterned folk songs.

At some point, Times New Viking may have to leave their trebly, hissy comfort zone, and branch out to areas of mid to hi fidelity like Guided by Voices did during their Matador career. Eliott Smith did it. Sebadoh and Pavement did it, too. Very few artists have lived their whole careers by the motto, “Lo-fi do or die,” and even if the possibilities of lo-fidelity seem endless now, eventually they’ll come to be constrictive. Could the thirty clear seconds tacked to the tail of “The End of All Things” signify an abandonment of their rigid style? Or, is their future foretold in closing blast of “Post Teen Drama,” where the distortion and hiss is higher than at any other point on Rip It Off? The only certainty is, if and when Times New Viking do it, and record a “clean” and “proper” sounding album, it will be a move they make on their own terms.

Rip it Off by Times New Viking: 8 out of 10 on The Rockometer. 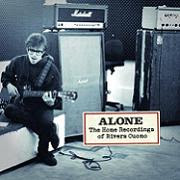 The title says it all. Alone – The Home Recordings of Rivers Cuomo. The Weezer frontman’s solo album, is neither his band’s great lost album, Songs from the Black Hole (although five songs from those sessions do appear on Alone), nor is it the album that straightens out their career after two hit and miss releases in Maladroit and Make Believe. It is a collection of odds, sods, demos, and toss-offs, recorded by Cuomo throughout the past fifteen years.

For completists, Alone can be a treasure trove of old recordings, helping fill the gaps between Weezer’s inactive years, but for the casual fan, it’s likely to be as uneven as Weezer’s recent output. For every gem like the space, inspired “Blast Off,” which recalls the blue album’s best guitar crunching, geek rock, while fulfilling Cuomo’s dreams of an interstellar rock opera, there’s a corresponding dud like “Dude We’re Finally Landing,” to remind you that rock operas generally aren’t good ideas these days. And for every moment of wistful, innocent power pop (“Superfriends”), and every moment of vulnerable, contemplative emotion (“Longtime Sunshine”) where Cuomo reminds you how talented he can be, he brings you back down to earth, and the land of diminishing returns, with boy band balladry (“This is the Way”) and embarassing, Beastie Boys rapping (“The Bomb”).

Did I mention that this is a collection of home recordings, and not a proper album? You shouldn’t be too surprised that Alone is an inconsistent affair.

Alone – The Home Recordings of Rivers Cuomo: 5 out of 10 on The Rockometer.