Warning: "continue" targeting switch is equivalent to "break". Did you mean to use "continue 2"? in /nfs/c06/h01/mnt/88637/domains/blog.irockcleveland.com/html/wp-includes/pomo/plural-forms.php on line 210
 I Rock Cleveland I Rock Cleveland | “Pirates” by Mr. Gnome 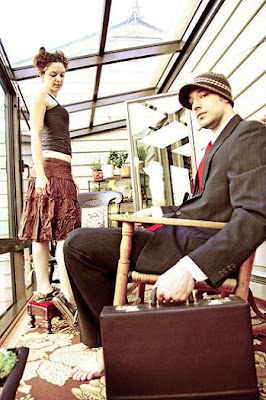 Cleveland’s mr. Gnome have had the misfortune of being saddled with one of the worst made up genres next to nu-rave, namely, trip rock. If they weren’t from my home town, I’d swear the British press had a hand in concocting this one, too. Trip rock, the name itself sounds like it originated from some long lost MTV footage of Tricky jamming with Bush during a Mid-Nineties awards show. Still, as much as I hate the phrase, and as much as that non genre kept me away from this band in the past, it just may be the quickest and most concise way to describe their sound. Guitarist Nicole Barille’s vocals effortlessly alternate between delicate, breezy whispers to wild-eyed siren calls, and along with drummer Sam Meister, they are able to match Barille’s many moods with passages that alternate between ethereal swarms of sound and hard charging alt-rock. Besides, with trip-hop survivors, Portishead, about to release their long awaited third album, maybe the time is right for this thing called trip-rock.

mr. Gnome’s debut full length, Deliver This Creature will be out May 8th on El Marko Records, and a CD release party scheduled for April 25th at the Beachland Tavern. Oh, and speaking of gnomes, has anyone else seen this? (via Beggar’s Blog) A real life gnome is terrorizing the citizens of a small South American town.