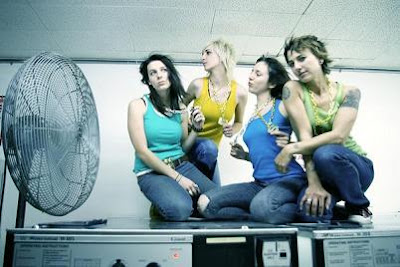 I have it on good authority that the four young ladies in Cleveland’s Hot Cha Cha have been tearing up local stages with some of the best live shows around town. I can’t confirm this rumor as I’ve been out of action for a bit, but trust me here, unlike most of my other sources, this isn’t just some loud mouth I overheard at the bar after a few Pabst, this one’s legit. Now, while I can’t vouch for their performances, even if their myspace photo galleries seem to back up everything I’ve heard, I can vouch for their music — a playful, powerful, and sophisticated mix of big city, post-punk and new wave that sounds far more refined than their Cleveland address might imply.

Hot Cha Cha’s debut EP will be out on Cleveland’s Exit Stencil Recordings later this year. They’re playing The Tower on March 22nd with Sinkane, Daisy, and Houseguest, and will be in Kent the following week, the 28th, at The Zephyr with Beaten Awake.