Warning: "continue" targeting switch is equivalent to "break". Did you mean to use "continue 2"? in /nfs/c06/h01/mnt/88637/domains/blog.irockcleveland.com/html/wp-includes/pomo/plural-forms.php on line 210
 I Rock Cleveland I Rock Cleveland | “You on the Run” by The Black Angels

“You on the Run” by The Black Angels 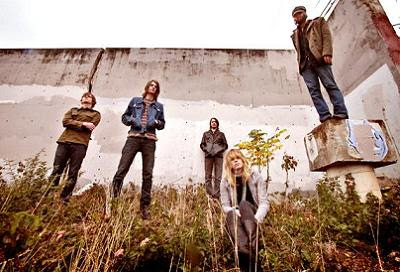 Around these parts, Directions to See a Ghost, the second album by Austin rockers, The Black Angels, is easily one of the most anticipated releases of 2008. Their debut release, 2006’s Passover, was a heavy and mesmerizing take on the classic psychedelic sounds of bands like The Velvet Underground and 13th Floor Elevators, which aptly captured the fear, paranoia, and anger of living during a new age of warfare. A relentless touring schedule brought the band to Cleveland multiple times, and included a high profile opening slot for The Black Keys’ homecoming gig on their Magic Potion tour, as well as one memorable night at the Beachland Tavern where their extended set closed with a shredding cover of the Stooges classic “I Wanna Be Your Dog” and a good old freak out jam with members of Vietnam that went way past bedtime for more than one office worker in the crowd.

Although “You on the Run,” the lead cut from Directions to See a Ghost, may feature an Eastern vibe drifting in and out of their big, thick drone, this isn’t one of those neo-hippie love fests. With ominous, primal drum beats and squelching guitar solos, it’s clear The Black Angels aren’t stopping their explorations into the seedier side of psych rock anytime soon. And why would they? If you’ve seen the band on recent tours, and heard the new material they’ve been previewing, then you’re well aware that the sinister sounds of Passover were only the beginning.

MP3: The Black Angels – You on the Run (via Stereogum)

Directions to See a Ghost will be available digitally on April 15th with the physical release following on May 13th. Rumor has it, The Black Angels may be joining forces with The Warlocks this Summer for a tour of mind-melting proportions.