“Dig Lazarus Dig!!!” by Nick Cave and the Bad Seeds 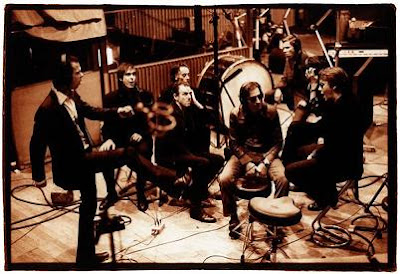 If it seems like the ageless Nick Cave has been around forever, well, it’s because in musical terms, he has. His discography stretches way back to 1980 and the influential post-punk band, The Birthday Party. And not only has he released too many albums for me to take the time and count on Wikipedia or All Music Guide, some of his best work has been produced in just the last few years. It started with 04’s Abattoir Blues/The Lyre of Orpheus, then continued with last year’s “Mini-Seeds” project, Grinderman. One could even say that his career has been reborn, if one wanted to make the obvious segue into his latest album with The Bad Seeds, Dig Lazarus Dig!!!

While Cave is quick to point out that he was keen on finding a more expansive sound for his latest album with the Bad Seeds, there’s still plenty of nasty guitar grit left over from his work with Grinderman. It may not be the focus of the mix, but as Cave spins the tale of a modern day Lazarus scratching and scavenging his way through life in New York City, vicious bits of six string squalor punctuate Larry’s maddening struggle with living life as someone who should be dead.

Dig Lazarus Dig!!!, the 14th album by Nick Cave and The Bad Seeds will be out April 8th on Anti- Records. The title track was recently included on the Anti- Records 2008 Sampler. It can be downloaded from the Anti- Records blog and includes tracks by Bob Mould, Billy Bragg, Man Man, Devotchka and others.