The Rockometer: Mission of Burma, Ladyhawk, and F*ck Buttons

In Our Band Can Be Your Life, Michael Azerrad’s look at the roots of indie rock, he introduces his chapter on Mission of Burma with a quote by Byron Coley and Jimmy Johnson from Forced Exposure, “Mission of Burma played a noisily aggressive brand of guitar pop that was always real f*ckin’ close to just-what-the-doctor-ordered, but most of the time it seemed like nobody cared. Why? Well, people are a**holes, I guess.” I had a different excuse. When Mission of Burma were first active between the years of ’79 and ’83, I was but a youngster listening to John Denver, Simon and Garfunkel, Neil Diamond and whatever else I could find in my old man’s record collection. How was I to know that my old man’s records were decidedly un-rock? Later in life, after I had my personal musical awakening, Mission of Burma would fall into the unfortunate category of “Heard of ’em/Haven’t listened to ’em.” I fully understood that Mission of Burma were an important band, but now, I was the a**hole ignoring them for whatever flavor of the month band was burning up alterna-rock radio that month. It wouldn’t be until Mission of Burma reformed, nearly 20 years after their break-up, and I found myself reading Azerrad’s book, that I stopped being an a**hole and gave this band a listen. Man, was I an a**hole.

Mission of Burma early work showed them as America’s answer to Joy Division, but with more aggression, less depression, and more noise. You can hear their influence in everyone from Fugazi to Sonic Youth. While their first single, “Academy Fight Song,” and EP tracks “(This Is Not) A Photograph,” and “That’s When I Reach for My Revolver” (All gathered on the expanded Signals, Calls, and Marchers) raged with the feelings of youthful displeasure common for those living in the Reagan years, there was much more to this band than rousing the force of collective shouts and fists-in-the-air from the kids in the front row. With Roger Miller’s incisive and forceful guitar work, a heavy and technically precise back end provided by bassist Clint Conley and drummer Peter Prescott, and tape manipulator Martin Swope, lurking behind the scenes, cutting, slicing, and re-feeding live sound back into the mix, Mission of Burma were far more daring than many of their dissatisfied peers.

Perhaps no song encapsulates Mission of Burma’s complicated relationship history and its challenging view of structure and convention more than “Trem Two,” the first single from their first full length, Vs. In the liner notes, Prescott, Conley, Miller, and producer Rick Harte relate how it went from an unpopular choice at its time of release in ’82, to one of their most requested live songs for the modern day version of the band. Miller’s guitar is heavily treated in echo and delay, blurring the boundary between notes, while it repeats a slithering and seductive riff. There isn’t a cracking chorus to be found and the vocals rarely rise above a meditative tone. You can’t stomp, mosh, or stage dive to it. No wonder those accustomed to Burma’s first singles were so confounded. “Trem Two” was a cerebral number, rewarding for an attentive listener intent on slicing through the static with a careful pair of ears and big, bulky headphones plugged into the hi-fi. Consequently, its exactly the type of track that stands out in this newly re-mastered form.

Yet, it’s not like Mission of Burma entirely abandoned the sound that gained them their initial following in Boston and the Northeast. It’s just that on Vs the raging moments were either less direct and less obvious than their early period output, as on “Learn How,” “Mica,” and “The Ballad of Johnny Burma,” or, as was the case with “This is Not a Photograph,” consigned to the end of the album.

The Horrible Truth About Burma was that their live shows were wildly inconsistent. The title of the record itself, is the band’s own admission of this fact. As my only live experience with Mission of Burma was during their 2006 tour for the Obliterati, where they’d obviously worked out all the kinks, I can only rely on those who where there, like Tristam Lozaw, who was quoted in Azerad’s book as saying, “When they were good, they were very very good, but when they were bad they were horrid…Because they took chances, you never knew whether you were going to get one of the most spectacular experiences of your life or if it was going to be a ball of incomprehensible noise.”

The ten tracks on the original release, and the four new to the reissue, were all taken from Mission of Burma’s final tour. And true to their form, or lack thereof, Prescott recounts in the liner notes, that the shows got progressively worse as the shows wore on. You would never guess it from the quality of these recordings. Crisp and clean, they seem to reveal a band at the height of their game, not one capable of a “ball of incomprehensible noise.” Most notable among the tracks included on The Horrible Truth About Burma, is “Peking Spring,” a song that by all rights should have stood along side Photograph, Revolver, or “Academy Fight Song,” as one of their greatest anthems, but was never put to record, for the band had already tired of it by the time they got to recording Signals, Calls, and Marches, and Vs.

Like Miller, Prescott, Conley, and Swope’s replacement, Bob Weston, who are active again, recording and touring as Mission of Burma, we’re all a little older, and a little wiser, but nonetheless, still rocking. Hell, some of us may have even taken Miller’s tinnitus as a warning and wear earplugs to shows these days. Being older and wiser, I think we can all appreciate the second chance afforded by these remastered albums. So, whether you overlooked this band the first time around, ignored them during your college years, or have yet to sample any of their recent output, it’s time we all stop being a**holes and give Burma the attention they deserve. This is essential listening.

Note: In addition to previously unreleased tracks, each of these reissues come with a bonus DVD with live concert footage. Never one to care for bonus DVD’s, I can attest to the fact that for once, these discs are definitely worth their inclusion. 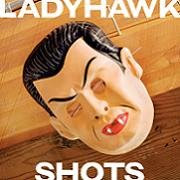 After a slight detour into weirdsville on 2007’s Fight for Anarchy EP, Vancouver’s Ladyhawk return with a set of gruffy, rugged tunes refining the booze fueled, Neil Young inspired rustic rock sound of their debut. Following the opening tracks (“I Don’t Always Know What You’re Saying” and “S.T.H.D”) where lead guitarist Darcy Hancock reaffirms his standing as one of indie rock’s modern guitar heroes, the album takes a decidedly dark turn. It turns out the young love that sounded so boundless and powerful on “Teenage Love Song” from their self titled release, has gone to sh*t right quick. “Fear,” “Corpse Paint,” “(I’ll be Your) Ashtray,” “Faces of Death,” and “Ghost Blues” aren’t exactly the stuff of lovebirds fluttering about the Canadian wilderness. The pain is all to real in Duffy Driediger’s voice as he’s a shaky, manic mess on “Ashtray” and even more so on the rickety, lament “Faces of Death, ” as Hancock’s desperate, flailing guitar solo retreats, and he’s left alone with the broken down refrain “There’s no such thing as endless love.” If all of this sounds too heavy for one heart to take, the band do provide a break in the form of “Night Your Beautiful,” where light, lifting Do-da-do’s, a la Lou Reed’s “Walk on the Wild Side” coexist with one thick, bad-ass stoner rock riff, and again on “You Ran,” a fleeting, two minute shakedown filled with re-verb, prickly feedback, and even more wild ax work. See, even at their darkest and most desperate, Ladyhawk can’t forsake rock and roll.

Shots by Ladyhawk: 8 out of 10 on The Rockometer 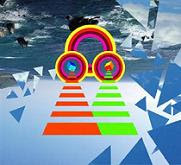 Where the sound of blenders, garbage disposals, and cuisanarts meets shimmering melody, you’ll find Fuck Buttons. At their best, as on “Sweet Love for Planet Earth” and “Bright Tomorrow” they combine elements of harsh noise and soothing ambient sounds, to create a singular movement transcendent of those divergent genres. Yet, while they’re more than capable of producing more of these moments, there are times on Street Horrrsing (namely the middle sequence of “Ribs Out,” “Okay, Let’s Talk About Magic,” and “Race You to My Bedroom/Spirit Rise”) where one gets the impression that the Britol (England) duo are guilty of indulging their abstract half and reining in their gentler side, content to let the blenders do their thing accompanied by tribal beats, incomprehensible yelps, or generally slow moving and/or uninspired melodies. Even with its faults, Street Horrrsing is a promising debut record that hints at greater possibilities in the future should they learn to perfect their mix of the haywire and the heavenly.

Street Horrrsing by Fuck Buttons: 6 out of 10 on The Rockometer