Warning: "continue" targeting switch is equivalent to "break". Did you mean to use "continue 2"? in /nfs/c06/h01/mnt/88637/domains/blog.irockcleveland.com/html/wp-includes/pomo/plural-forms.php on line 210
 I Rock Cleveland I Rock Cleveland | “Cat Swallow” by Royal Bangs 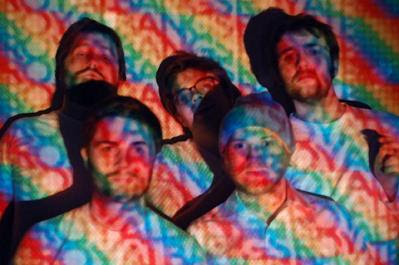 In a recent interview with Pitchfork, Patrick Carney of the Black Keys and Audio Eagle Records, explained how Knoxville’s Royal Bangs came to be on his label. Surprisingly, it was a friend request on Myspace, “Yeah, I saw (Royal Bangs’) thing, and for some reason I just clicked on it, just to see if they were from Akron or not. I wasn’t sure who they were. It was like the first time I was totally blown away by a band I’ve never heard of via MySpace.” Who am I to disagree with the drummer from the MF’n Black Keys? If Carney was blown away by the Royal Bangs, then they’ve gotta be rad, right?

Honestly, as I’ve been spending more and more time with the Bangs’ debut disc, We Breed Champions, the Keys connections become less and less important. Dudes have laid down some top jams. However, like “Cat Swallow,” and its high pitched, guitar riff, a lot of these tracks don’t take the obvious route to rock. It may take a couple listens before their skewered sense of melody kicks in, but once it does, you may find yourself like me: windows down, volume up, putting your fellow drivers at risk as you’re pounding rhythms out on your steering wheel, oblivious to rush hour traffic.

We Breed Champions by Royal Bangs will be out May 13th on Audio Eagle Records.