From the Vaults of I Rock Cleveland: Mega Rare Tracks by The Mice 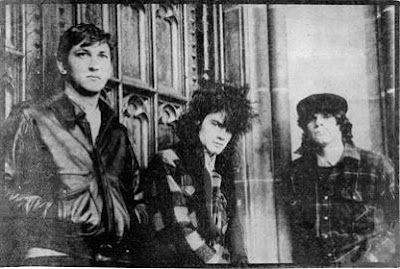 As the story goes, when Scat Records originally planned to reissue the catalog of Cleveland power pop legends, The Mice, there was going to be a second disc of previously unreleased material including tracks from their unfinished studio album, Canterbury Bells, as well as live recordings from WRUW’s Live from Cleveland, included with the EP For Almost Ever, and their first full length, Scooter. While video footage of their Live from Cleveland appearance has been available on Youtube, the ever so elusive studio material was a little more difficult to track down.

Scat Records did sell the bonus disc as a CDR for a limited time, so Disc 2 was out there, it was just a matter of finding someone who owned it. Should be easy in the Age of the Internet, right? Not so. Months went by as my personal plea to make a deal for this disc went unanswered, and all my attempts to google a copy turned up empty. When I mentioned my personal quest to other rockers in the area, many were skeptical. No one had ever heard of such a thing. Could Wikipedia have lied to me?

Then, one day I received a tip from a reader that another blogger had posted some of those mega rare tracks. Emails were exchanged, CD’s were mailed, and finally I had the goods: 23 tracks (13 studio and 10 live) of ragged, power pop glory, from one of Cleveland’s finest underground acts.

Listening to these tracks now, it’s hard not to think about what could have been. The Mice had broken up before Canterbury Bells was ever released, and this could have been their big break. Songs like “Public Television” and “Nearly Mile Away” are as solid as anything from For Almost Ever/Scooter.

It’s also difficult not to think about what their enigmatic frontman, Bill Fox, is up to these days. Occasionally, you’ll hear stories of people running into him at a bar or a house party, yet when Joe Hagan tried to find him for an interview with Believer Magazine for last year’s music issue, he was unsuccessful. Sadly, one thing Fox hasn’t done in years, is release any new recordings.

In related news, Scat Records will be re-issuing both of Bill Fox’s Nineties solo albums (Shelter from the Smoke and Transit Byzantium) later this year on vinyl and cd. Those discs don’t go for cheap these days. The last time I priced Shelter from the Smoke, it was going for anywhere between $50 and $100.

The Mice on Myspace (Unofficial)