C’mon Get Heavy with Triclops! 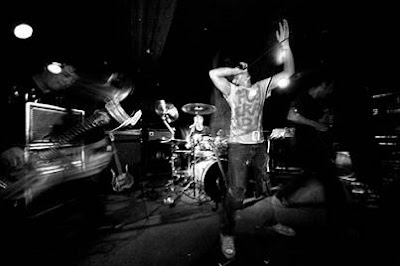 From the land where metal, progressive, and punk converge (San Francisco) comes the mighty three eyed rock and roll beast (actually a four piece, so technically it’s an eight eyed beast) known as Triclops! Women and children quiver in its deep, black shadow as it lumbers from town to town. Men are in awe of its power ( I have no data on their fan demographics, but I suspect their brand of rock, reminiscent of Butthole Surfers, Janes Addiction and At The Drive brings in a manly audience). With the speed and dexterity of a monster half its size, no one is safe inside the club. From atop the stage, its bone rattling guitar riffs have been known to shake its victims to pieces. Its piercing screams can deafen those foolish enough to enter without proper protection. No one dares speak the name of Triclops, lest they want to find themselves face to face with a creature of mythical strength capable of destruction so hellish, not even Hades himself can bare to brave its presence (I think I’ve been watching too many made for TV movies on the Sci-Fi channel). Behold the awesome power of Triclops! (Seriously, these tracks are pretty rad).

Out of Africa, by Triclps!, is out now on Alternative Tentacles.