Warning: "continue" targeting switch is equivalent to "break". Did you mean to use "continue 2"? in /nfs/c06/h01/mnt/88637/domains/blog.irockcleveland.com/html/wp-includes/pomo/plural-forms.php on line 210
 I Rock Cleveland I Rock Cleveland | And Now For Something Completely Different: “Celebrate the Body Electric (It Came From an Angel)” by Ponytail

And Now For Something Completely Different: “Celebrate the Body Electric (It Came From an Angel)” by Ponytail 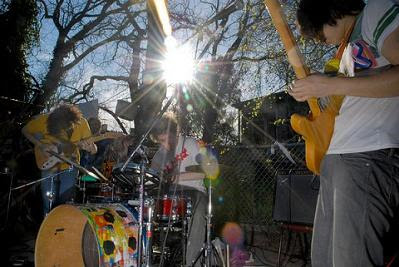 While listening to the latest release by Baltimore’s Ecstatic Sunshine, I couldn’t escape the feeling that something was missing. Instead of ecstatic sunshine, with dueling guitars bouncing like shimmering rays on a hot summer day, they’d become, “Oh, hey look. The sunshine’s out today. You guys wanna jam for a bit? If not, that’s cool. We can jam when the sun’s out tomorrow.” Not exactly ecstatic, but not horrible either. It’s a solid release. Turns out the reason for its lack of excitement (besides a change in direction to longer, well thought out pieces) was that the ecstatic half, Dustin Wong, had left to concentrate on his other band of wonderful Baltimore weirdos, Ponytail.

Hello Ponytail and hello ecstasy! On “Celebrate the Body Electric (It Came from an Angel),” big, glimmering guitar lines that run furiously through the mix, a slamming beat, and hollered, non-sensical lyrics (as well as something resembling yodeling), all add to the everlasting fun party. Baltimore may not look like heaven, and it certainly may not feel like heaven for some of its residents, but the wonderfully, strange sounds of Ponytail would have you convinced that they hail from some exotic happy land.

MP3: Ponytail – Celebrate the Body Electric (It Came From an Angel)

Ponytail’s Ice Cream Social will be out June 20th on We Are Free Records.

We Are Free
photo by Nate Dorr