Warning: "continue" targeting switch is equivalent to "break". Did you mean to use "continue 2"? in /nfs/c06/h01/mnt/88637/domains/blog.irockcleveland.com/html/wp-includes/pomo/plural-forms.php on line 210
 I Rock Cleveland I Rock Cleveland | “The Open Road” and “Repulsion” by Blackstrap

“The Open Road” and “Repulsion” by Blackstrap 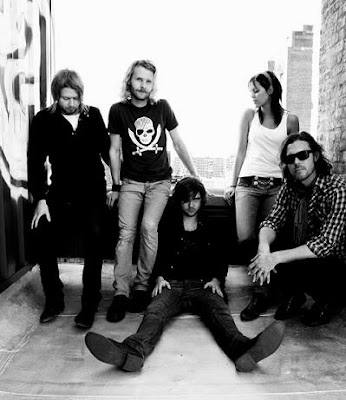 It only takes a cursory listen to verify Blackstrap’s membership in The My Black Rebel Bloody Jesus and Mary Motorcycle Chain Valentine Club. At times you’ll have them pegged as My Bloody Valentine, other times the Jesus and Mary Chain, or Black Rebel Motorcycle Club. From the detached cool of their vocals, to the their affinity for the swirling sonics favored by the shoegazing sect, these Swedes proudly rock the noise of their idols on their latest release, Steal My Horses and Run.

There’s a temptation to dismiss this band as nothing more than a cover band capable of cranking out any tune from the Brit Box on call, except for two factors: First, any psychedelic band starting out today, whether they’re from the Velvet Underground school, the Sabbath school, or the My Bloody Valentine school, are limited in their stylistic choices from the day they start their band, and, more importantly, if My Bloody Valentine released an album this solid in the year 2008, music fans would be going totally ape sh*t for this stuff. While Blackstrap may not be the first band to ride the feedback and fuzz wave across the Atlantic, they’re certainly one of the most capable bands in the MBV school of dynamics. Besides, do you really think that Kevin Shields will ever finish another My Bloody Valentine album?