Warning: "continue" targeting switch is equivalent to "break". Did you mean to use "continue 2"? in /nfs/c06/h01/mnt/88637/domains/blog.irockcleveland.com/html/wp-includes/pomo/plural-forms.php on line 210
 I Rock Cleveland I Rock Cleveland | “Everythang is Everythang” by Black Diamond Heavies 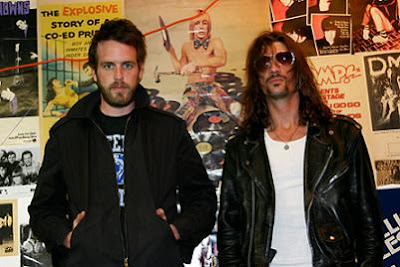 To say John Wesley Myers has a rough, weathered voice is an understatement. It’s not your average gravelly, growl. Dude sings like he’s survived his adult life on a diet of unfiltered cigarettes, moonshine, gasoline, and shards of broken glass. While those pipes may be enough to distinguish the Black Diamond Heavies from the rest of the garage rock crowd, there’s also the matter of their unique set up. It’s just Myers on keys and Van Campbell on drums, responsible that raging and soulful, Southern holler.

Taken from A Touch of Someone Else’s Class, the follow to the Black Diamond Heavies’ 2007 debut, Every Damn Time, “Everythang Is Everythang,” is one ragged romp through the looking for love with all the wrong woman blues. Campbell’s drums are pushed far into the red, producing a pounding the sh*t out of a cheap kit effect, while Myers keys belie his woman toubles with something so positively bouncy it almost resembles glee. It may sound like an odd combination, but that’s the blues. If your woman’s got you down, then the best thing you can do is call together the band and holler about it

The Black Diamond Heavies’ A Touch of Someone Else’s Class, recorded with Dan Auerbach of the Black Keys, will be out June 10th on Alive Records. Special guests include Auerbach on guitar, and Ralph Carney, the long time Tom Waits collaborator, and uncle of the Black Keys’ Pat Carney, who also guested on The Keys latest disc.