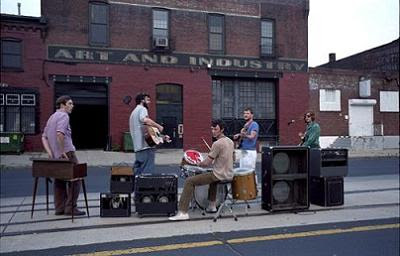 Not to be confused with “My Old Ways,” a track from Dr. Dog’s much loved 2007 release, We All Belong, “The Old Days,” is from the Philadelphia psych pop band’s forthcoming disc, Fate. Now, whether they’re talking about the old days, or their old ways, it’s more or less the same ways: an admiration for the sweet sounds of classic pop groups like the Beatles, Byrds, and Beach Boys filtered through a similar love for rag-tag, classic indie rock. This is not the same as saying Dr. Dog haven’t learned a new trick or two. “The Old Days,” draws the listener in with a repetitive piano melody, sounding as if its being played on some rickety old keys, and an overlapping loop of fuzzed out bass that comes in during the second verse. Then, there’s the breakdowns: the first one is built on an old rag-time melody, while during the second, a blast of guitar joins the two existing loops, making Dr Dog’s old days, and old ways sound as fresh as ever.

Fate by Dr. Dog will be out July 24th on Park the Van Records. The band will be in town on Monday, August 4th for a show at The Beachland Ballroom.