A Lesson In Chooglin’ With Endless Boogie 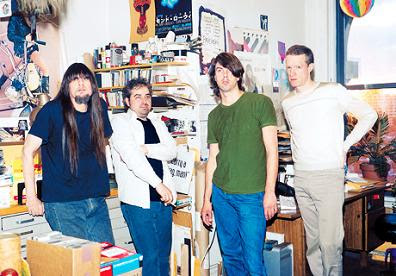 Welcome rockers, today’s lesson is on one of my favorite words in the rock lexicon, choogle, and the art of chooglin’. While it’s a popular word amongst rock journo types, and a very fun word to say, it’s a word that’s often misused and it’s real meaning and origin are a bit difficult to pin down. As a matter of fact, I’ve used the word chooglin’ to describe the shufflin’ sound of a blues based in the past, without knowing what it really means to choogle.

Recently, there have been major developments in the study of chooglin’, and its mysterious origins have been revealed. Thanks to Christopher Gray of the Austin Chronicle, who wrote a fine article, To Choogle or Not to Choogle, last year, we’ve come much closer to understanding the fine art of chooglin’.

Turns out, the first musician to use the word choogle, was Jon Fogerty of CCR. Here’s how Gray describes its origins:

Choogle dates back at least to 1969, when it was coined by John Fogerty. Lord knows how he came up with it, but Fogerty advised listeners to “Keep on chooglin'” for eight whole minutes on Creedence Clearwater Revival’s second album, Bayou Country. According to Fogerty, chooglin’ – never, ever “choogling” – is what happens when “you got to ball and have a good time.” While the working class is especially prone to chooglin’ – “Here comes Louie, works in the sewer, he gonna choogle tonight” – it’s ultimately open to all: “If you can choose it, who can refuse it, y’all be chooglin’ tonight.”

Thanks to Fogerty, choogle became inextricably, and somewhat mistakenly, linked with the South. But, as defined by “Proud Mary” and “Born on the Bayou,” it’s more of a rhythm than anything else: fluid, organic, undulating. Though the tempo varies, all choogle carries an insistent drive that just won’t quit.

Now, while Gray’s definition of chooglin’ is about as clear as Mississippi mud, it can still give us a good starting point to examine other musician’s who choogle. Remember, when Fogarty coined the term chooglin’, even he didn’t know its exact meaning, so it’s definition will remain fluid.

Among the artists Gray cites as chooglers are a couple names that should be familiar to Cleveland rockers: Joe Walsh, and his chooglin’ anthem, “Rocky Mountain Way,” and Akron’s retro chooglers, The Black Keys. Those are both great examples of chooglin’, but perhaps the greatest example we have available today comes from a NYC foursome of record freaks (guitarist Jesper Eklow, guitarist/vocalist Paul Major, bassist Mark Ohe, and Chris Gray on drums), known as Endless Boogie, whose first two releases, both very limited edition vinyl pressings, made them an elusive legend in the underground rock scene.

What makes Endless Boogie the masters of modern chooglin’? With long drawn out blues burners, reminiscent of the progenitors of chooglin’, CCR, as well as pre-cheese era ZZ Top, dudes manage to lay down one top jam after another in such a manner that their down and dirty bayou rhythms sound neither contrived nor adulatory. One might even go so far as to say Endless Boogie were born to choogle.

Hopefully, all of my academic jibber jabber did not go to waste, and this discussion on chooglin’ has cleared up any confusion you may have had on what it means to choogle, and the fine art of chooglin’. The way I see it, the only thing left to do, is choogle. These two jams: “Smoking Figs in the Yard” and “The Manly Vibe,” both come from Endless Boogie’s latest release, Focus Level.

Endless Boogie’s Focus Level, is out now on No Quarter records, and for those of you not hip to the eBay record collecting scene, this one won’t cost you top dollar.