“Fire on Corridor X” by All the Saints 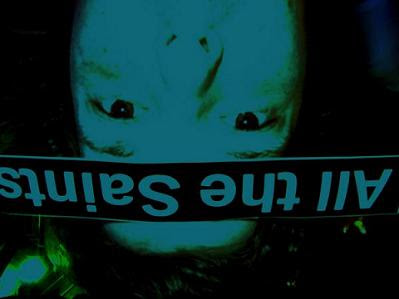 With All the Saints sharing a label with post-punk ear annhilators, A Place to Bury Strangers, in Killer Pimp Records, it’s natural to start drawing comparisons between the two groups. Although both bands hail from the land of apple pie, baseball, and freedom fries, they share an affinity for British rock, be it New Wave, Post-Punk, Brit-Pop or Shoegaze. When A Place to Bury Strangers debut was released last year, they drew immediate comparisons to the Jesus and Mary Chain, (a very loud) Echo and The Bunnymen, and (a very loud) Cure. While All the Saints have more in common with groups like Swervedriver, Ride, and Oasis. Also, there’s the matter of volume. ATPBS obviously win the decibel battle with their gridning metal on metal effects pedals (as they do against most bands), but rest assured, All the Saints aren’t members of the soft-rocking, indie sect. In fact, they can more than hold their own against most bands, even if their loudness is more akin to Oasis’ early albums where the levels of everything were turned way up, than it is to the wave of rumbling sounds of the other shoegazers.

Consequently, if you’re an anglophile like me, and have your copy of The Brit Box placed prominently in your cd rack, you’ll find songs like “Fire on Corridor X” from All The Saints self titled release, hit some key sweet spots: There’s the aforementioned thick guitar sound, rattling floorboards and annoying neigbors, as well as vocals that could have conceivably come from a long lost Gallagher brother. Then, just as you’re ready for this space rocker to burn its way through the upper atmosphere in a flurry of feedback, it pulls back, and gently glides down to Earth with an ambient outtro. Very well done, chaps dudes.

MP3: All the Saints – Fire on Corridor X

All The Saints’ self-titled release is out now on Killer Pimp Records. And be forewarned, should you google All the Saints, be sure to use quotes (“All The Saints” vs All the Saints). If you don’t, you’ll get lots of hits on the Mid-Nineties, UK girl group, All Saints.

All the Saints
Killer Pimp Records