Warning: "continue" targeting switch is equivalent to "break". Did you mean to use "continue 2"? in /nfs/c06/h01/mnt/88637/domains/blog.irockcleveland.com/html/wp-includes/pomo/plural-forms.php on line 210
 I Rock Cleveland I Rock Cleveland | Catching Up With the Toths: New Albums From James Jackson Toth and Jex Thoth

Catching Up With the Toths: New Albums From James Jackson Toth and Jex Thoth

With Wooden Wand on indefinite hiatus, the husband and wife duo of James Jackson Toth and Jessica Toth, are both focusing on their new projects. James, recording under his full name, James Jackson Toth, and Jessica, fronting her band Jex Thoth. Although Jex worked on James’ album, and vice versa, that’s where the similarities end. 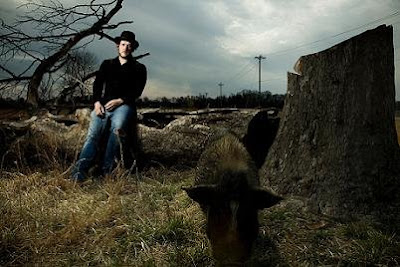 Stripped of his freak folk name, and safely distanced from any pretense associated with the new weird America scene, Waiting in Vain, James Jackson Toth’s first album recorded under a normal name, finds him operating in the mode of a Seventies inspired, American roots rock leaning, singer/songwriter. The transformation is so complete, that outside of a little extra re-verb on album closer “The Dome,” there’s nary a trace of freak folk, psychedelic rock, weird America, or any other genre tag associated with his previous project, Wooden Wand. Equally surprising, once you remove all that mystical, new age hocus pocus, there’s a real honest to goodness strong voice waiting, one that’s been biding its time, one that’s more than ready to shine. Long time fans of Wooden Wand may waver at Toth’s turn to Seventies styled rock, pop, and folk, and it’s clean and crisp arrangements. Yet, if Waiting in Vain is given its fair chance, then songs like the tear soaked and beer soaked bar room ballad, “Look in On Me,” and the glam infused pop shuffle of “Beulah the Good,” do little to tarnish Toth’s reputation, hell, they may even strengthen it. 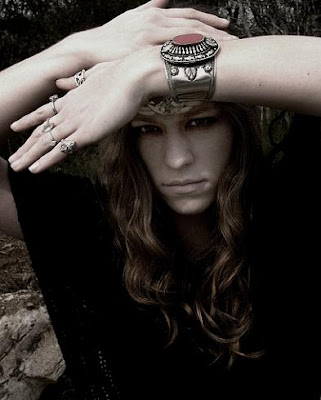 Now, if you’re wondering where all the mystical, new age, hocus pocus once prevalent in Wooden Wand went, look no further than the band of James Jackson Toth’s better half, Jex Toth, aka Jex Thoth. Just check out the photos on Jex’s myspace, and you may start wondering whether you’re browsing the pics of Medieval reenactors, a heavy metal band, or a Medieval band of gypsies playing heavy metal.

If you guessed metal band, you earned yourself a gold star. Jex Thoth’s debut disc plays like Grace Slick fronting Sabbath, or an old 45 of Heart’s “Barracuda” spun the speed of a 33. The guitars are thick, sludgy and doom like, while Jex’s harrowing voice is enough to raise even the most satisfied soul from below the ground. Again, it may not necessarily be what you expected from Wooden Wand, but if you’re a fan of old time stoner rock, complete with fair virgins, dark overlords, big bongs, and black lights, then turn this one up loud enough to rattle the floorboards, and let Jex be your guide to the other side.