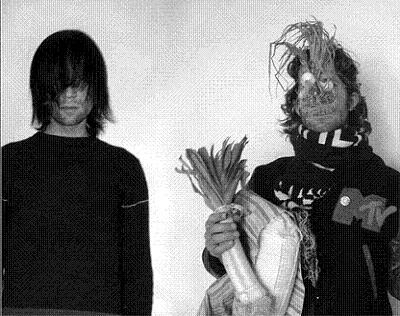 With the re-emergence of the lo-fi aesthetic led by bands like Times New Viking, No Age, and Psychedelic Horseshit, it’s only natural to wonder who’s going to be the next band to take their art damaged, fuzzy and hissy racket to the underground masses and gain acceptance from the indie elite in the process. Sounds like a question for the Magic 8 Ball, no?

Magic 8 Ball, will the primitive San Francisco psych rock band, Sic Alps, be the next band to break out of the lo-fi scene?

It is decidedly so.

Who am I to argue with the magic 8 ball? It’s never been wrong before.

After a series of limited run, obscure releases (collected on the compilation, A Long Way Around to a Shortcut released earlier this year) where Sic Alps explored the sonics between the two minute pop song, minutes of noisy, skronk, and all stops in between, they seem poised for a breakthrough with their forthcoming long player, US EZ, due out later this month on Siltbreeze. Of course, it doesn’t hurt that this is the same label that helped launch Times New Viking into the mainstream prior to their deal with Matador Records. And it also doesn’t hurt that songs like “Bathman,” contain more ideas in a minute-and-a-half, then some indie bands have on a whole album.

US EZ by Sic Alps will be available in LP and CD July 15th on Siltbreeze Records, and they will be in town on July 23rd playing Pat’s in the Flats with Thee Scarcity of Tanks and Stephe DK (The New Lou Reeds).