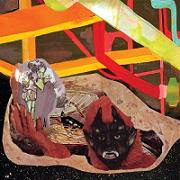 It seems like ages ago, when the Montreal weird rock quartet, Wolf Parade, scored underground success with their debut disc, Apologies to The Queen Mary. In the mean time there were side projects (Sunset Rubdown and Handsome Furs), and side projects to side projects (Swan Lake), while other new sensations like Clap Your Hands Say Yeah, and The Arcade Fire found time to release their highly anticipated second discs. Yet, nothing new from Wolf Parade.

It’s somewhat fitting, then, that a release that was years in the making, is itself one of those proverbial growers, an album that takes a little time for it to really sink in. There’s nothing on At Mount Zoomer as immediately accessible as “You Are a Runner, and I am My Father’s Ghost,” “I’ll Believe in Anything,” “It’s a Curse”, or “My Heart’s on Fire” from Wolf Parade’s debut.

Familiar elements like spacey, Pink Floyd atmospherics, hair metal inspired guitar solos, and a keyboard melody on “The Grey Estates,” which has a striking resemblance to Rod Stewart’s “Some Guys Have All the Luck, provide some footing. Also on the listener’s side is the arena-sized, Springsteen influence, which appears on “Language City,” and the androgynous, Suede like Brit Pop of “An Animal in Your Care.” However, any familiar melody you find mingles with Wolf Parade’s carefree, carnival like atmosphere, producing something wholly unpredictable. Choruses come out during the unlikeliest moments, and nonlinear song structures are the norm. There’s zigs when you expect zags, and there’s false starts and false stops. At first, all this makes At Mount Zoomer disorienting and dense, and only gradually, once you have some resemblance of understanding of what’s going on in those mad minds, does it reveal itself as a wild and wonderful album.

At Mount Zoomer by Wolf Parade: 9 out of 10 on The Rockometer. 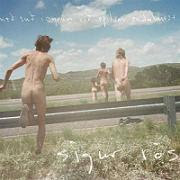 After years of recording grand, processional themes appropriate for hipster weddings, hipster funerals, or any hipster function with the right amount of pomp (definitely not hipster bar mitzvahs or hipster beer bashes), Sigur Ros, that Icelandic band who sing in that adorable made up language, Hopelandic, have finally branched from their signature sound. Now, you can do something with Sigur Ros that you have never done before. Frolic. At least that’s what the cover iamge for Med Sud I Eyrum Vid Spilum Endalaust leads me to believe, and the wonderfully titled first single, “Gobbledigook,” only strengthens that belief. It’s an upbeat number reminiscent of modern Scandanavian pop with acoustic guitars, fey vocals, and a drum beat seemingly a half beat behind the rest of the band. If I was ever in Iceland, Hopeland, or somewhere in Scandanavia with the right people and the right drugs, and this song, I could definitely see myself taking part in the naked frolicking.

Curiously, after such a stark departure on the lead track, Sigur Ros, quickly lose their sense of ambition with “Inni Mer Syngur Vitleysingur” and “Via Spilum Endalaust,” two numbers of much less adventurous Scandanavian pop, distinguished only by their reliance on Hopelandic. Then, by the time we get to the meat of the disc, Sigur Ros are back piling on the pomp, and the drama, (as well as the strings, and choirs, and such) for nine minute movements of intricate and organic grandness. There’s no denying they’re good at what they do, and “Festival” and “Ara Batur” are both well arranged, skillfully orchestrated, and the undeniable highlights of the disc, but, after an opening which promised so much more, two more wedding songs just aren’t enough. 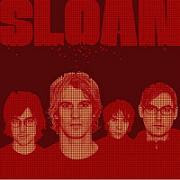 For those of us who’ve been following the Canadian rock band Sloan over the past decade and a half, it’s damn near unfathomable that they don’t have a bigger reputation here in the states. All they’ve done is release one solid rock album after another, and when that formal got stale, they blew the whole thing up with the quick hitting, 30 songs on a single disc, Never Hear the End of It.

Now, rejuvenated and back at the top of their game, the four songwriters in Sloan (Jay Ferguson, Chris Murphy, Patrick Pentland, and Andrew Scott), narrowed their scope, and produced a follow in Parallel Play, much more concise than its predecessor, but just as satisfying with its abundance of pop hooks and big guitar riffs.

For the uninitiated, the first half of Parallel Play serves as a career retrospective of sorts, except this is no repackaged singles collection. They’re all new jams. During the first six songs, you get the kind of big guitar rock Sloan perfected on Navy Blues (“Believe in Me” and “Burn For It”), Beatles inspired pop that characterized One Chord to Another (“All I Am”), Seventies power pop indicative of later era Sloan (“Cheap Champagne” and “Witch’s Wand”), and some of the pure punk rock energy that dominated Never Hear The End Of It in (“Emergency 911”).

If the second half feels like a bit of a downer, it’s only because it’s so difficult to find fault with anything that runs on the A side. Still, there’s more gems to be found like the Dylan like ramble and roll of “Down in the Basement,” and “I’m Not a Kid Anymore,” the first single from the disc, and another big guitar rocker ready made for rock kicks and air guitars. It also has the one song that may sum up Sloan’s career to date the best, “Livin’ a Dream.” Sure, other bands have had their big breaks and seen their star fade as quickly as the initial buzz hit the scene. Sloan, on the other hand, have made a steady career out of being a rock band. It’s no small feat these days, and no doubt, has its members feeling like they’re indeed living a dream.

Parallel Play by Sloan: 8 out of 10 on The Rockometer. 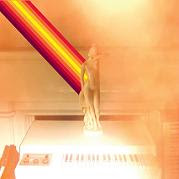 Ratatat have a sound built for NPR segues: Inteligent, futuristic, dancey, in a tap your fingers on the steering wheel kind of way, but not in a 4:4 to the floor kind of way, and edgy enough to appeal to the young, urban, and idealistic segment of the audience, but no so edgy that it would turn off the older, well-to-do, reliable donors. Stick a Ratatat jam at the end of a feel good story and you have happy commuters from coast to coast.

Yet, those same qualities that make Ratatat so appealing to the NPR crowd, also attribute to their relative anonymity. I know a Ratatat song when I hear one — the primitive clippity, clappity beats, and the elastic, French disco guitar effect (very similar to the one favorited by robotic, French disco kings, Daft Punk), allows their music to be easily identifiable. I just don’t always know which Ratatat song I’m hearing, since after a while, they all start to sound the same. With this in mind, Ratatat recorded their third album, LP3, in upstate New York in a studio with a wealth of keyboard instruments, adding some much needed variety, to their basic beats ‘n’ guitars sound.

The harpsichords, organs, pianos and such are fine and good, but they only address half the problem — the instruments may be different, but the songs remain the same. “Flynn” dabbles in spectral dub, “Brulee” mixes in a nice summertime, reggae vibe, and “Mumtaz Khan” is as close as Ratatat has ever come to replicating the rougher, urban rhythms of their hip hop mix tapes. Still, there’s any number of tracks I could have heard on NPR on any number of commutes over the past two years. Numbers which would have surely perked up my drive time, and tracks I would have been hard pressed to identify once the segue slipped away.