“Reservoir Park” by The Dutchess &The Duke 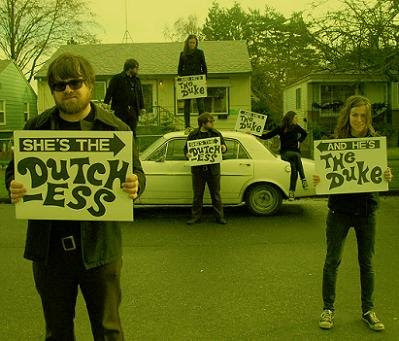 I like new. You like new. We all like new, but some times, endlessly chasing new sounds can get rather tedious, and the best new sounds turn out to be the ones that aren’t really new at all, and a plain old folk album sounds better than anything coming out of Williamsburg, Baltimore, or any other hipster hot spot. Last year it was the folk duo of Nina Nastasia and Jim White, whose You Follow Me, a simple album of guitar, drums, and voice, put many a cool kid to shame. This year, it’s She’s The Dutchess, He’s The Duke, by The Dutchess and The Duke.

What the Dutchess and The Duke do can hardly be called new. People have been singing folk tunes for as long as man has set words to music. And few would label this duo as innovators. The Dutchess (Kimberly Morrison) and The Duke (Jesse Lortz) have been kicking around in various garage, punk, and garage punk bands in the Pacific Northwest for a few years now. Yet, when the two come together, and sing those songs with such raw language, and such real emotion, and with such honest harmonies, they transcend those humble roots. This isn’t twisted folk, or freaky folk, lo-fi or weird America. It’s just plain folk music with a guitar or two, a little flute, the occasional tap of a drum, and hint of Rolling Stones. It also happens to be some of the best damn music I’ve heard in a long time.

The Dutchess & The Duke will be in Cleveland next Wednesday, July 16th at Now That’s Class. She’s The Dutchess, He’s The Duke is out now on Hardly Art Records.