Warning: "continue" targeting switch is equivalent to "break". Did you mean to use "continue 2"? in /nfs/c06/h01/mnt/88637/domains/blog.irockcleveland.com/html/wp-includes/pomo/plural-forms.php on line 210
 I Rock Cleveland I Rock Cleveland | 2008 Pitchfork Music Festival Day 2: Extra Golden

Meet the undisputed kings of day two of The Pitchfork Music Festival: Extra Golden. While you may not be familiar with the music of this half Kenyan half American band and their brand of Kenyan Benga-American Rock fusion, there’s a good chance you’ve heard their story. Prior to their first American tour, they were having issues with visas and The Department of Homeland Security, so they enlisted the help of soon to be famous Kenyan American, who at the time was the junior senator from Illinois, Barack Obama. With his help, and the help of countless others, they were able to get to the states and make those first dates.

Simply witnessing the joy and passion on the faces of the Kenyans who were part of the seven member touring band, was enough to put a grin on your face from ear to ear. They had the most infectious smiles and the most gracious personalities. Then, combined with the music, that seamless combination of African and American rhythms, spiced with R&B, soul, disco, and pretty much anything else designed to make your bottom half move, it was damn near impossible not to enjoy yourself. Look, I know proper press decorum. I should look studious with my notebook and clap politely after each song. And I know proper Pitchfork Festival decorum. I should look only slightly interested and mildly disaffected, and clap politely after each song. However, once Extra Golden got going and jammed on “Jokalando,” “Obama,” and “Night Runners,” decorum was out the window. There was smiling, and dancing, and it seemed like anything was possible. The most awkward dude in the crowd could dance with a totally hot babe for five ten FIFTEEN MINUTES! I wanted to ditch the bag, ditch the press pass and dance with totally hot babes for fifteen minutes. Instead, I smiled wide, tapped my feet, bopped my head, and applauded enthusiastically after each number. It was the least I could do for a band who have been through so much, and who delivered without a doubt, the best performance on the second day of the festival. 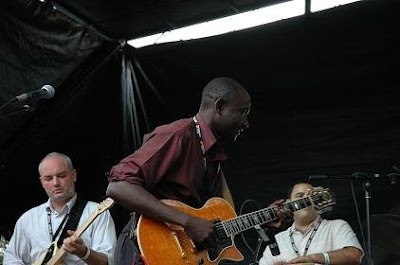 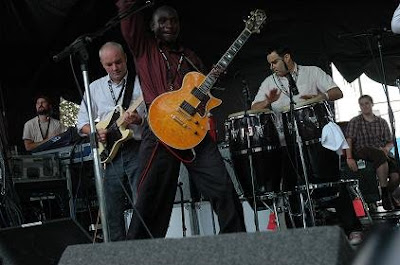 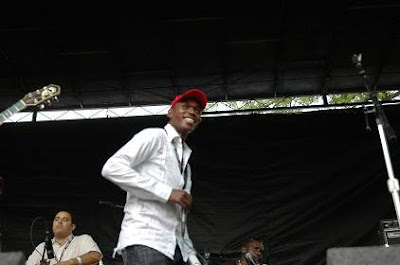