Warning: "continue" targeting switch is equivalent to "break". Did you mean to use "continue 2"? in /nfs/c06/h01/mnt/88637/domains/blog.irockcleveland.com/html/wp-includes/pomo/plural-forms.php on line 210
 I Rock Cleveland I Rock Cleveland | 2008 Pitchfork Music Festival Day 2: Vampire Weekend 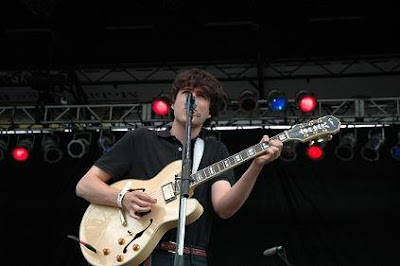 Here’s my new theory on Vampire Weekend: The only people who concern themselves with the band’s authenticity and whether they’re deserving of the truck loads of hype they’ve received in the past year are critics and obsessives. For the casual music fan, like all those crowding around the Aluminum Stage late Saturday afternoon, things like appropriation of world sounds, privileged lifestyles, and preppy clothing had no bearing at all. They wanted to hear those light summery sounds, bright guitar lines, syncopated rhythms, and the carefree croon of Ezra Koenig.

Unlike F*ck Buttons, and Sebadoh before them, Vampire Weekend have a sound tailor made for the big festival stage. Songs like “Mansard Roof”, “Cape Cod Kwassa Kwassa,” and “The Kids Don’t Stand a Chance” cut deftly through the humidity, polished up the grey skies, reached far back in the crowd, and had many in the ever growing sea of humanity singing, dancing, and bopping along.

Yet, while their songs may translate well to an open air setting, the band’s stage presence is still a bit lacking. Even with the record sales, and the attention, and MTV premieres, and with bigger and better gear producing a more polished sound, they lack the confidence needed to really deliver a stand out performance. When Koenig tried to engage the crowd to sing a long to “M-79” and “Blake’s Got a New Face,” he would say something like, “If you want to have fun, You can sing along. It’s your choice. So when I say ‘Blake’s got a new face, you say Blake’s got a new face. OK.'” C’mon man, you just released one of the best pop albums of the year, and if you want to get the crowd involved and believe in you and your music, you’ll need to ditch the awkward and modest shtick, cause if you don’t, you’ll never hear the sound of thousands of people echoing your voice.