Warning: "continue" targeting switch is equivalent to "break". Did you mean to use "continue 2"? in /nfs/c06/h01/mnt/88637/domains/blog.irockcleveland.com/html/wp-includes/pomo/plural-forms.php on line 210
 I Rock Cleveland I Rock Cleveland | “If I Get Myself Anywhere” by Buffalo Killers

“If I Get Myself Anywhere” by Buffalo Killers 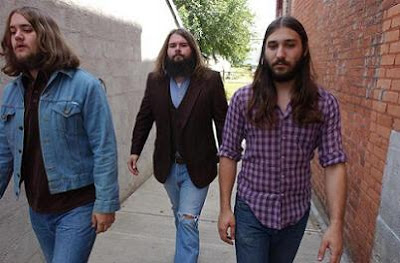 Do my ears deceive me, or is this some long lost T. Rex track? Has Rolan Bolan been holding back on a treasure trove of sweet boogie oogie laid down by his late father, the great Marc Bolan, before his death? If it’s not T Rex, then it has to be an old dusty groove done by Joe Walsh, or Grand Funk Railroad, right? Wrong, wrong, and wrong. If the id3 tag is to be believed, “If I Get Myself Anywhere,” comes from the second album by Cincinnati long-haired, retro-rockers, Buffalo Killers.

While everything about this cut, from the laid back Southern charm of the main guitar riff, and the sly, shuffling drum beat, to the velvety vocals, say all-request classic rock request hour, it’s a product of the modern age. With the help of the Black Keys’ Dan Auerbach, who helmed the producer’s chair, and who knows a thing or two about creating a retro-fantastic vibe, Buffalo Killers managed to avoid the riff by numbers trap which has been the downfall of many a retro rocker, and instead created something authentic. Well, maybe not quite authentic, after all we’re some thirty years beyond AOR. Still, at the very least, “If I Don’t Get Myself Anywhere” is one of the best damn approximations of the Seventies AOR sound around, and that’s no small feat when you’re treading on such well worn ground.

MP3: Buffalo Killers – If I Get Myself Anywhere