“The Birthday Wars” by Oxford Collapse 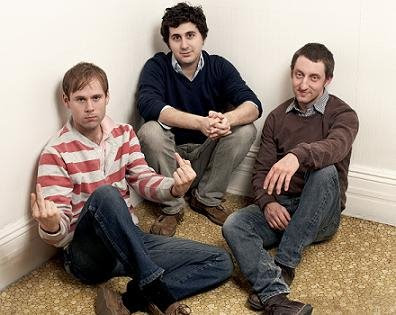 Tip number one on avoiding a birthday war: Ditch the double middle finger pose. Maybe, just maybe, your sulky, spoiled salute was the reason you were given first crack at the pinata filled with rocks and broken beer bottles. Just a thought.

Tip number two on avoiding a birthday war: Don’t play this jam. Unless your party is filled with Pabst pounding urbanites, it won’t do anything to diffuse the situation started by the rock and bottle pinata, in fact, it may serve as fuel for an already ugly scene.

Now, let’s say, your party is filled with Pabst pounding urbanites, then, bring it on, I say. Two minute, neo-classic indie rock jams, like “The Birthday Wars,” filled with screeching guitars and strained vocals, would be perfect. That, and the cake Jeff had for his birthday last year, that Italian one with the strawberries. It’s impossible to have a birthday war when everyone at your party is lost in a bliss of deliciousness. Oh, I’ll never forget that cake. It was so f’n good.

Bits by Oxford Collapse will be out August 5th on Sub Pop. The band will be playing Cleveland on August 9th with We Are Scientists at The Grog Shop.