Warning: "continue" targeting switch is equivalent to "break". Did you mean to use "continue 2"? in /nfs/c06/h01/mnt/88637/domains/blog.irockcleveland.com/html/wp-includes/pomo/plural-forms.php on line 210
 I Rock Cleveland I Rock Cleveland | The Rockometer: Take Shape by The Dreadful Yawns

The Rockometer: Take Shape by The Dreadful Yawns 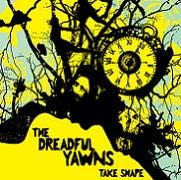 Take Shape, the latest album from Cleveland’s Dreadful Yawns, first took shake shortly after the release of their previous album, Rest. Nothing out of the ordinary there. Many bands start writing their next album during the promotion of the current one. What made the Yawns’ situation unique, is that principal songwriter, vocalist, and guitarist, Ben Gmetro, was promoting a new album, and writing the next one with an entirely new lineup of the band. Organist Clayton Heuer, vocalist Elizabeth Kelly, drummer Chris Russo, and second guitarist Eric Schulte all joined the Yawns shortly before Rest’s release.

You can call it fate, or luck, or a shrewd move on the part of Gmetro, but that new lineup seemed to click almost immediately. They were playing with zest, zeal, and The Dreadful Yawns sounded like an entirely new band. Well, technically, they were a new band, albeit one with an old name, and when it came time to celebrate the release of Rest, they played a double set: one with a full orchestra focusing on their older material, and the other with the new lineup, playing like a band who had nothing to lose, hitting on everything from classic garage rock to Velvets inspired jams, and freaking the f*ck out with loud, abstract guitar solos. The crowd at Parish Hall may not have realized it at the time, but they were hearing many of the numbers that would make up Take Shape.

The energy from those 07 shows has certainly carried over to Take Shpe. It ebbs and flows, fakes out and freaks out, rocks and retreats with a wide dynamic range, and has a general sense of unpredictability, not in the what the f*ck is this band doing now kind of way, but in a good way, where the listener is kept on the edge anticipating what could come next. There’s the garage rock rave ups (“Queen and The Jokester” and “Kill Me Now”), some psychedelic swamp boogie (“Saved”), and a much needed come down (“Dead Soldiers.”)

Speaking of unpredictability, Take Shape’s highlight, “Don’t Know What I’ve Been On,” thrives on it. In another band’s hands, it would be nothing more than a loose, jangly, psychedelic pop number. Yet, the Yawns take this basic pop number, and twist it and stretch it with a series of wild and free guitar solos which make repeated attempts to completely eliminate any memory of the opening melody. They start, stop, then rock. Start, stop, then rock. They continually tease the listener, and just when you think the interstellar freak out will win, there it is. The opening melody returns, slight, delicate, and a little worse for the wear. What an amazing ride!

If there’s one constant on this album, where nothing’s constant, it’s the vocals provided by the duo Gmetro and Kelly. Gmetro has a carefree, casual, laid back style, while Kelly is light and uplifting, and when they combine, it’s as if there’s one voice singing in two tones at once. The duo is at its best on the delicate drive time lament, “Catskill.” First, it’s just Kelly and Gmetro carrying the song. Then, there’s a gentle strum and tip-tap from the drum. At the bridge, the Heuer’s organ comes in and it’s brilliant, mimicking the bright colors of the fall foliage along the road.

Gmetro and Kelly make such a formidable pair that when he and Russo switch spots for “All of Me,” it results in Take Shpae’s only letdown. Technically, there’s nothing wrong with this song, and it’s woozy tempo provides a nice break between what would be Side A and Side B, but Russo and Kelly aren’t Gmetro and Kelly, and it’s as simple as that.

As was the case with Rest, now that Take Shape is out, The Dreadful Yawns are busy writing new songs, and by the time you have it in your hands, and make it down to the rock club, they’ll probably be playing a whole new set. This time, however, the band’s in tact, with one brilliant album to their names, and what no doubt will be, another brilliant one on the way.