The Rockometer: Simple Machinery by Bears 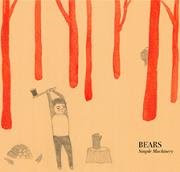 We all know Cleveland Rocks, but Cleveland Pops? When Craig Ramsey and Charlie McArthur left Rock ‘N’ Roll behind for the slight, soft indie pop sounds of Bears, it had the feeling of a short lived side project meant to release their inner twee. Few would have foreseen it becoming a full time band. Now, however, with a second full length in Simple Machines, and a series of singles and EP’s to their credit, they’re no longer a curiosity or a band to pass the time, but the signature band in an emerging Cleveland pop scene which includes like minded, sunny souls in Afternoon Naps, Muttering Retreats, and Trouble Books.

Like the best in indie pop, Ramsey and McArthur have that innate ability to hook the listener with a simple melody. You can try to deconstruct a song like “Wait and See,” but regardless of how you come to your conclusion, you’ll reach the same one — it’s just a great pop song, one that bops along in your brain long after the last note was played.

“Since I Met You,” “Please Don’t” and “Never Again” all feature vivid tones and light reverb, the type of which characterized much of The Shins’ debut disc, Oh Inverted World. Coupled with an affinity for classic styled, British Invasion pop, and Bears could provide the soundtrack for a quirky Wes Anderson comedy like Rushmore. While numbers like “Dolphins,” “Subtle Way,” and “Your Help” suggest Bears have heard enough American roots music in their time to tactfully incorporate laid back, rural sounds into their mix. This sophisticated, rustic vibe carries over to album closer, “Our Time,” a number which could befit a back porch jug band, chewin’ tobacco and all, should Ramsey and McArthur ever decide to trade their pop tools for overalls and banjos.

Could Cleveland Pops really replace Cleveland Rocks? It could happen one day. Who ever thought the Cleveland Browns would leave town? And if Cleveland pop ever did move to the forefront, it’s not a stretch to imagine a band like Bears leading the way. Yet, for that to happen, McArthur and Ramsey, will have to stretch out a bit and carve a more distinctive pop sound. The Shin’s comparison is too immediate for anyone who has spent significant time with Oh, Inverted World, making it hard to imagine one existing without the other.

Simple Machinery by Bears: 7 out of 10 on The Rockometer.